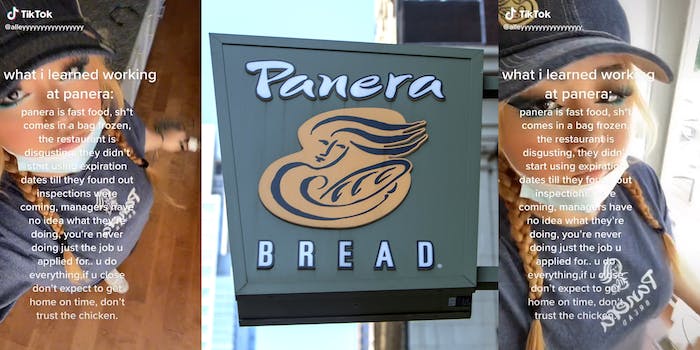 ‘You’re never doing the job u applied for’: Panera worker quits, airs out complaints against the store

'I’ve literally heard so many bad things abt working there that i declined the job offer.'

A TikToker who claims to be a former Panera Bread worker is airing out her grievances about the location she worked at to viral success.

User Alley (@alleyyyyyyyyyyyyyyyyy) posted her video on the subject about a week ago. The video has quickly racked up over 755,000 views, with many alleged former Panera employees commenting on the post to back up or refute her claims.

Among her list of grievances are that much of the food comes frozen (this is true, according to Mashed), the restaurant is “disgusting,” it “didn’t start using expiration dates till they found out inspectors were coming,” management is inadequate, and employees are “never doing just the job [they] applied for,” among other alleged issues.

She also urged viewers to not “trust the chicken.”

“Finally quit … last place i recommend working,” she said in the caption.

In the comments section, Alley clarified that she is not speaking about all Panera Bread locations, simply her own.

“This was my panera and some others in the comments but not every panera is the same,” she wrote.

Still, this prompted many commenters to share their own thoughts on the chain.

“The worst place to work at,” a user claimed. “Im literally just showing up today and never going back.”

“I’ve literally heard so many bad things abt working there that i declined the job offer,” another added.

Others refuted her, saying the quality of the Panera Bread location largely depends on who runs it.

“Depends on management tho, mine has always been very sanitary and strict on it,” shared a commenter.

Even more said these alleged issues were not unique to Panera.

“This is quite literally every restaurant lmfao,” a user claimed.

In a later TikTok, Alley showcases some of her Panera Bread location’s Google Reviews.

Complaints, according to screenshots of the reviews she featured in the video, range from food poisoning to simply saying “disgusting,” with many users noting inconsistent quality.

Alley said the baked goods are “fine” after being asked by a viewer to “give us examples of what is safe to eat.”

“Pastries are fine,” she starts before noting an alleged caveat, “if the baker decides to wash his hands that day.”

The Daily Dot reached out to Alley via TikTok comment and Panera via email.