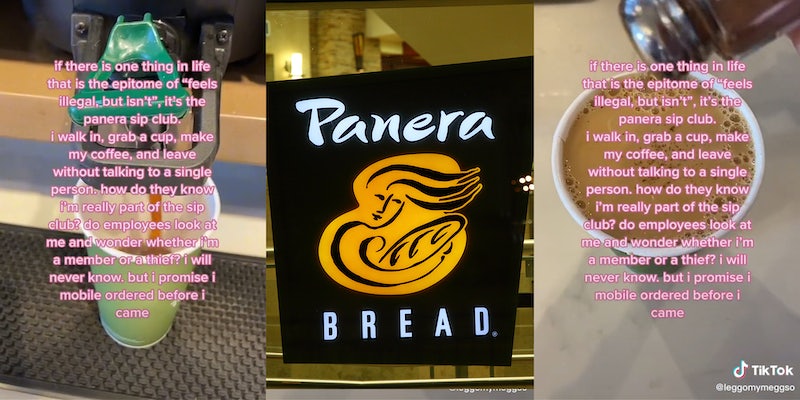 ‘Do employees ever look at me and wonder whether I’m a member or a thief?’: Customer’s video about Panera’s ‘Sip Club’ sparks debate

'How do they know i’m really part of the sip club?'

This week, a TikToker went viral for a video showing herself freely going into Panera Bread to get unlimited drinks without needing to show her order, after the launch of Panera’s paid unlimited beverage service “Sip Club.” The video stirred debate in its comments section about the apparent lack of enforcement for the new service.

Panera Bread is a bakery and cafe chain with over 2,000 locations across the United States and Canada. As previously reported by the Daily Dot, Panera announced in April it will be offering a semi-unlimited beverage service called “Sip Club” for only $10.99 per month and offered a short-term promotion (which ended in May) that allowed some people, like the TikToker in the viral video, to get a free subscription until July.

Members of the Panera Sip Club get a free drink with unlimited refills every two hours, and need to mobile order drinks prior to coming into the restaurant. However, as TikToker Meg (@leggomymeggso) describes in a viral video with over 1.8 million views, it seems the policy is largely unenforced.

“I walk in, grab a cup, make my coffee and leave without talking to a single person. how do they know i’m really part of the sip club? do employees look at me and wonder whether i’m a member or a thief? i will never know. but i promise i mobile ordered before I came in,” the TikToker wrote over a video of herself pouring coffee at Panera bread.

“It’s been a month and i still feel like i’m doing something wrong,” the TikToker captioned the video.

The viral video sparked debate in its comments section about the new unlimited beverage service. Many users who said they are Panera employees explained they do not care to check for online orders.

“I work at Panera and sometimes I do wonder if people are just grabbing the cups and not with the app but oh well,” one user said.

“Coffee and soda and all those drinks are so cheap we don’t even care,” another shared.

Others who said they are Panera customers claimed it’s easy to get away with getting free drinks at the restaurant.

“I promise u do not have to join the sip club to do this,” one user commented.

“I’ve never paid for a drink at panera and i’ve never joined that sip club….” another shared.

The TikToker even received a comment from the Panera Bread TikTok account, which seemed to encourage her to keep up her Sip Club membership.

The Daily Dot reached out to Panera Bread via its website and to TikToker Meg via comment on her viral TikTok.