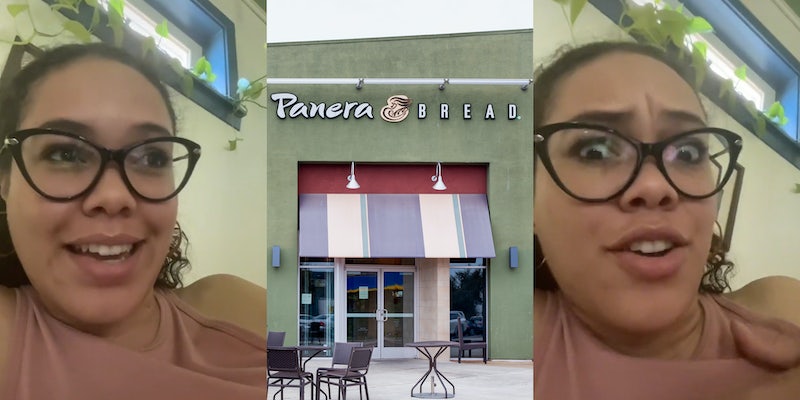 'Billion dollar corporations do not need cents to donate to charity.'

A TikToker claimed in a viral video Panera Bread uses rounded-up change donations for charity at the cash register as tax-write offs. The claim sparked debate in its comment section about whether the claim is a myth, and why billion dollar corporations are requesting donations from average customers in the first place.

The viral TikTok, which has over 294,600 views and was posted last month by a TikTok user (@banishedprincess), shows a TikToker telling a story of a cashier at Panera Bread asking her to round up 8 cents on her bill to donate to charity. The TikToker says she denied the request, surprising the cashier.

“@Panera Bread youre not slick !” the TikToker captioned the video.

While a company can write off charity donations, it makes from its profits on its end-of-year taxes, tallied up cents from customers are not included in write-offs, according to AP News. Customers may document and write off cash register donations for their own tax returns, but stores cannot claim the donations as their own. Instead, a company can act more like a holding receptacle and keep customer donations completely separate from its own.

Viewers in the comments section of the viral TikTok debated the validity of the TikToker’s claim. Some users believed the TikToker and argued in her defense.

“You’re right. better for you to write it off yourself,” one user commented.

“Most times they have already made a contribution to the charity. And they pocket the money from the people sometimes making a profit,” another falsely claimed.

Others pointed out the TikToker was not being accurate.

“This is a myth and is extremely harmful to charities,” one user commented.

“Accountant here, it’s not a write-off it’s just for PR. If they claimed it as a write-off it would be tax fraud,” another claimed.

On the other hand, some users argued that regardless of the validity of the TikToker’s claim, it was ridiculous for Panera Bread—a massive company which is reportedly worth billions of dollars—to ask normal customers for donations.

“Like why is a million dollar corporation asking me for money ???” one user argued.

In a follow-up video responding to those who said her claim was a myth, the TikToker clarifies her position and criticizes Panera Bread.

“So many of y’all said this and I just need y’all to know, even if this was a myth, I don’t give a flying fuck. I’m gonna fucking spread the misinformation because billion dollar corporations do not need cents to donate to charity. If they wanted to donate to charity, they would just do that. They have the fucking money to do it,” the TikToker says in the video.

“I promise you we are not harming charities by not giving 8 cents to the fucking billion dollar corporations that ask for it after we already give them our fucking money. Also, charities are a fucking scam in the first place. If you wanted to give to people you don’t need to fucking make an organization to do it. You would just give to fucking people,” she continues.

“My fucking question is why do you need this egregious myth to not donate your 8 cents to these billion dollar corporations? I worry for your fucking brains,” the TikToker says, closing the video.

Other TikTokers have sparked controversy for claiming corporations can use cash register donations as tax write-offs. In 2020, one viral TikTok making a similar claim led a tax policy think-tank, called the Tax Policy Center, to write a press release debunking the myth.

The Daily Dot reached out to @banishedprincess via TikTok comment and to Panera Bread via email. Neither responded in time for the publication of this article.