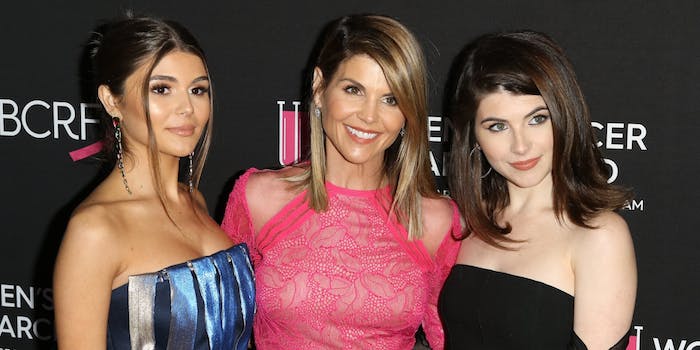 Lori Loughlin's daughter at the crosshairs of college admissions scandal.

New evidence has emerged in the college admissions scandal.

A fake resume, which appears to belong to Lori Loughlin‘s daughter Olivia Jade Giannulli, has been released by federal prosecutors. The redacted document, obtained by People, purports its subject to be an “accomplished crew athlete.” While nothing expressly states that the resume belonged to Giannulli, who is also a YouTube star, the high school graduation date aligns with hers. Prosecutors in the investigation, dubbed Operation Varsity Blues, say Giannulli never even participated in a crew program.

The scandal enthralled the nation for several months in 2019. After news broke that several high-profile celebrities were part of a shocking college admissions scam, people were glued to the story. Celebs like Lori Loughlin from Full House and Desperate Housewives’  Felicity Huffman were implicated in the nationwide scandal.

Along with its claims about her athletic prowess, the resume lists several awards Giannulli supposedly won. It also lists some of her relevant skills, including “awareness, organization, direction and steering,” according to People. Loughlin has been embroiled in the scandal since it first broke in March. Prosecutors allege that Loughlin and her husband paid $500,000 to employ William Singer. Singer, an admissions consultant, then reportedly falsified documents to classify Loughlin’s daughters as experienced crew members. This allowed the Giannulli girls, who actually had no prior crew experience, to enter the University of Southern California as recruits to its crew team.

As noted by People, USC’s registrar previously confirmed that neither of the Giannulli girls is “currently enrolled” at the university. Loughlin and her husband are pleading not guilty to charges in the college admissions scandal. Charges include “federal programs bribery, money laundering conspiracy, conspiracy to commit mail and wire fraud, and honest services mail and wire fraud,” according to People.

A source close to the Loughlin-Giannulli family told People that the family had nothing to do with the falsified resume. “This application was not filled out by anyone in the Giannulli family,” they said. “It was filled out unbeknownst to them by someone at USC.”