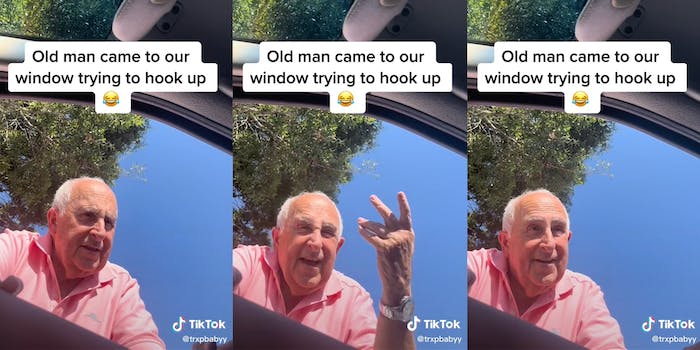 ‘’My wife doesn’t have to know’…gramps been doing this his whole life’: TikTokers film ‘old man’ trying to hook up with them

TikTokers were taken aback after a recent video of an older man behaving inappropriately toward two young people went viral on the platform.

In the video posted by user @trxpbabyy, an old man can be seen asking if the young women would “like to know [him] better” and would “like to hook up with [him] some time.” The creator assured viewers in the caption that they gave the man fake names.

The video currently has over 7.5 million views.

Then, after Emily has rejected his advances, he turns to ‘Jennifer’ and asks if she’s “disappointed that [he] didn’t ask [her] to hook up.” He also seemed to lose interest in Jennifer after learning she was 17, while maintaining his interest in Emily despite her only being a year older.

These were all moves that viewers found inappropriate, creepy, and gross.

“‘Are you disappointed that i didn’t ask you out’ like sir i’m good thanks,” one user wrote.

“He had to make sure she wasn’t a minor,” another added. “He don’t wanna do jail time.”

Many commenters argued that ‘Emily’ and ‘Jennifer’ were being too nice to the man.

“It was harder for me to hear how polite the young girls were,” one user wrote. “Education needed here. He didn’t deserve kindness.”

“Yall really shouldnt be so nice to These Kinds of People,” a second agreed. “It could end badly hella quick. Especially since he had access to the inside of the car.”

“Y’all entertained that for way to long,” a third echoed.

Other commenters speculated that this was not new behavior for the man.

“He’s definitely been doing this for years poor grandma,” one user wrote.

“‘My wife doesn’t have to know’….. gramps been doing this his whole life,” a further user claimed.

Overall, some users took an important lesson away from this viral video.

As one user wrote, “Just because people are old does not mean that they’re all cute and innocent.”