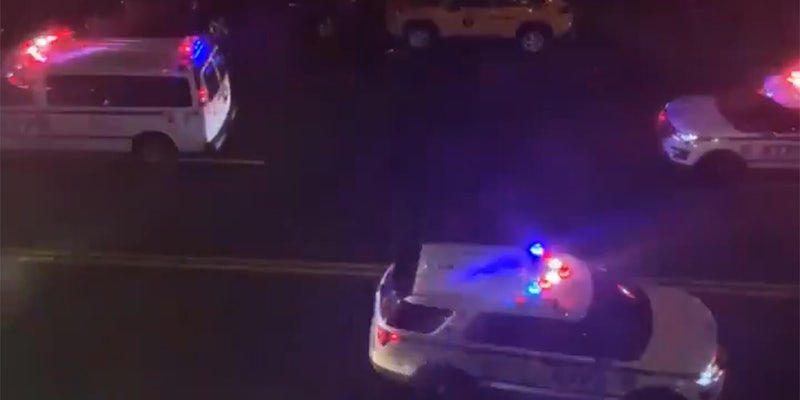 Video shows NYPD blasting sirens on empty street at 3am

NYPD says it was responding to a 'call of a large crowd.'

The New York Police Department made its presence abundantly clear during the early hours of Monday morning, according to a recent viral Twitter video.

Twitter user @fromzerotojeo shared footage of a swarm of police cars blasting sirens and patrolling both sides of a city street on Monday morning. The video has earned over 25,000 retweets and been viewed 2.7 million times.

“In West Harlem, 3am. NYPD putting on a show with fireworks in the background,” @fromzerotojeo captioned the video. “@NYGovCuomo this is what they are paid for huh?”

The New York Police Department said it was responding to a “call of a large crowd.” The department said the police used the sirens to disperse them. No arrests were made.

However, the video shows nearly empty streets. Unsurprisingly, many responses on Twitter ranged from suspicious to outraged.

For one, a barrage of police sirens makes it nearly impossible to sleep. Weeks of protests over the deaths of George Floyd, Breonna Taylor, and other unarmed Black men and women killed by police—which have subsequently led to calls to defund the police—have also left many people warier than ever of heavy police presence.

“This is the new version of ‘blue flu’ I’m convinced of it,” @NaturaSacra tweeted. “NYPD ‘protesting’ new oversight rules and calls to defund.”

The video also prompted some to double-down on their calls to defund the police.

“Every one of these cops should be fired for misuse of city property,” @Magnus919 added. “First, #DefundThePolice. Then, charge the MF’ers with the crimes we’ve caught them at.”

The video of the NYPD prowling the streets of West Harlem emerged two days after author Robert Jones, Jr. shared an elaborate Twitter thread theorizing that the massive increase in fireworks in New York City is part of a government effort to disrupt protests and desensitize citizens to the sounds of explosions.