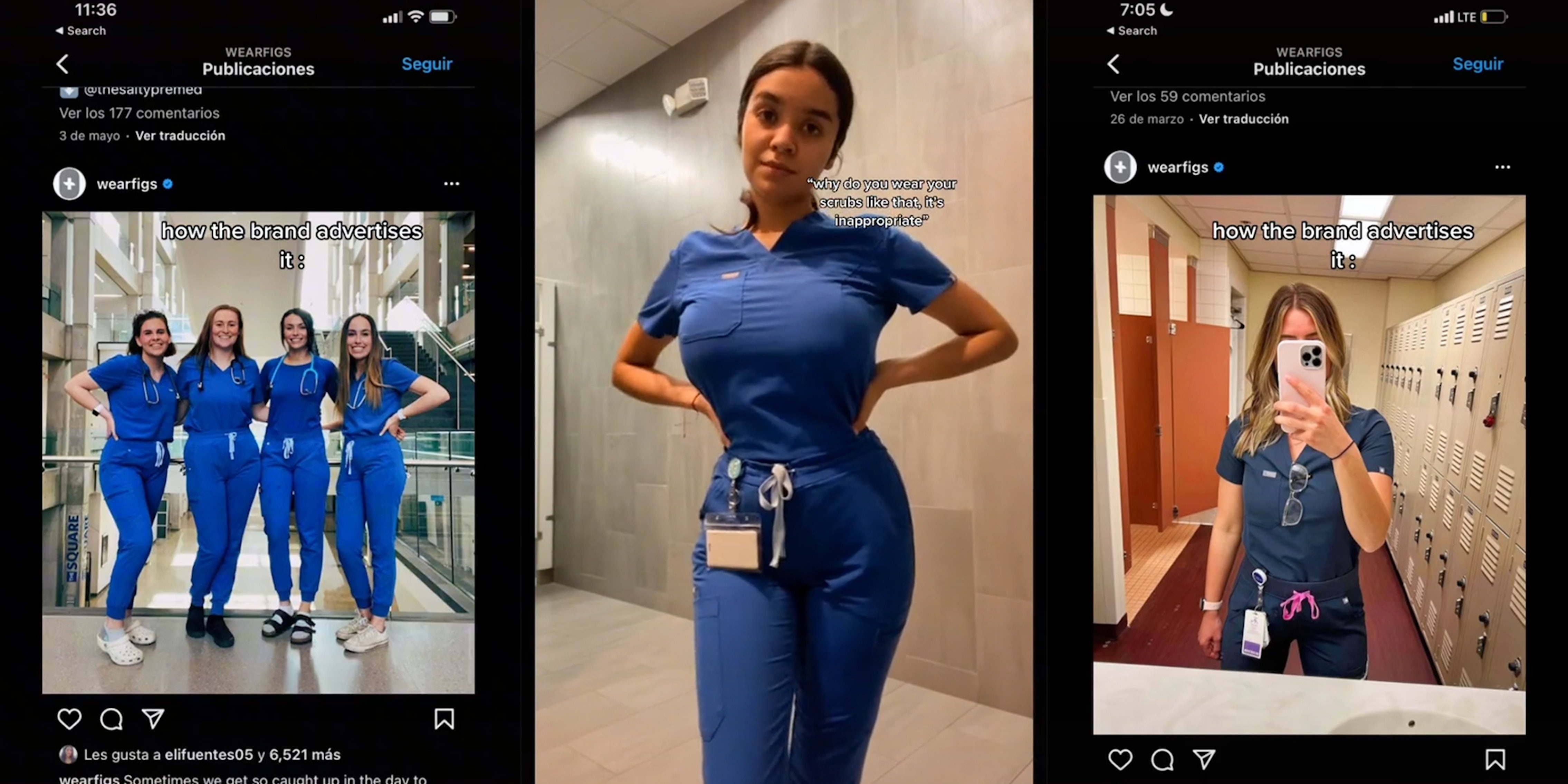 ‘Some people have an issue with my body not my scrubs and it shows’: Nurse says she was told her scrubs are ‘inappropriate,’ sparking debate

"Anyone saying ‘buy a bigger size’ it doesn't rlly work like that."

A nurse claimed she was told the way she wears her scrubs is “inappropriate.”

In the now-viral video, user Erika (@_erikamdiaz) shows the outfit in question, following the clip up with images from the brand’s Instagram page showing how the scrubs are supposed to be worn. While Erika does have different body proportions than the models in the photo, the way she wears her scrubs seems to fall in line with the brand’s expectations.

The brand behind the scrubs is FIGS.

“Some people just have an issue with my body not my scrubs and it shows,” Erika wrote in the video’s caption.

“Just for clarification i am 5’2” and 107 lbs,” Erika added in the comments section.

“I literally work 2 jobs, volunteer and i am still studying,” she continued in a later comment. “im devoting my life to the improvement of others and anyones opinions are irrelevant.”

At first, some TikTokers took the side of those who said the look was inappropriate—or at least, incorrectly sized.

“Or you could just buy a slightly bigger size…it’s no big deal (no pun intended),” another added.

However, the comments section soon turned against these users. First, other TikTokers pointed out that if Erika is comfortable and able to perform her job, the perceived size of her scrubs shouldn’t be an issue.

“Anyone saying ‘buy a bigger size’ it doesn’t rlly work like that,” a commenter explained. “Sometimes a bigger size will be too big on the arms or too long.”

“Everyone has a different body type and clothes can fit differently for everyone so it’s not anyone place to judge her wearing normal scrubs,” a further user stated.

Second, users were quick to point out that by continuing to remark on her outfit, TikTokers were reinforcing Erika’s original argument.

“I ain’t remember the last time I cared what a NURSE looks like when they’re helping me,” one pointed out. “regardless if you’re a patient or an employee.”

“If she’s covered up, it’s appropriate. She can’t help how she’s built. Her shape isn’t inappropriate,” another said.