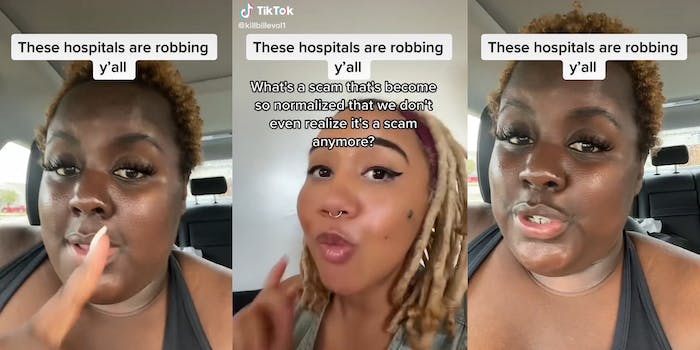 ‘These hospitals are robbing y’all’: Nurse says she’s never paid a hospital bill in her life

A woman who says she’s a traveling nurse went viral on TikTok for claiming she has “never paid no hospital bill, a day in [her] life.”

“Insurance, no insurance, I ain’t paying it,” user @killbillevol1 says in the video.

Her stated reason? Inflated prices in the American healthcare industry.

“These hospitals are robbing y’all,” the text overlay on her video reads.

Her video currently has almost 20,000 views.

In the video, @killbillevol1 says her realization of the industry’s inflated prices came after stumbling across a patient’s itemized receipt for their time in her care.

“Mind you, this doesn’t include any scans, any consultes from the doctors, any lab tests, any care from the nurses or from the techs,” she adds.

According to Healthcare.gov, these numbers are actually on the lower end, with the site claiming the average cost of a three-day hospital stay is around $30,000, though these numbers can vary wildly and often include the cost of testing.

For example, a 2014 report from the International Federation of Health Plans cited by the Washington Business Journal puts the average cost of a one-night stay without additional care at $4,293.

@killbillevol1 told the Daily Dot she’s been in the healthcare industry for nearly nine years.

“I think it’s ridiculous that those in charge of the healthcare system in this country haven’t figured out a way to be more affordable and accessible to the average American population,” she said. “I understand that it’s a business and they have bills to pay. But so many people have died or had their illnesses worsen because they avoided going to the hospital so that they wouldn’t rack up any debt.”

“People don’t know what it’s like to take care of a patient, crying their eyes out and raising up their blood pressure because they don’t know how they’re going to pay the bills they have now, including the medical bill they’re going to receive when they get discharged from the hospital,” she continued in an email to the Daily Dot. “What do I say to them?!”

On TikTok, some users supported @killbillevol1, citing their own experience with medical billing.

“$70,000 before insurance to birth my child who ended up being an emergency C-section,” one user claimed. The Guardian reported in 2018 that “on average, hospitals charged $32,093 for an uncomplicated vaginal birth and newborn care, and $51,125 for a standard caesarean section and newborn care,” citing data from a 2013 study by the the advocacy group Childbirth Connection.

“This is true. I used to work in the billing department for Emergency Rooms. Just checking in was a $1200 charge, before even being seen by the doctor,” another added.

“We pay 800 a month for insurance, like what? that’s not enough you gonna bill me thousands too?” a third asked.

However, some took the opposing view.

“This is a great way to lead people to destroy their lives with unpaid medical bills,” a user claimed. “Poor credit destroys soooo much!! congrats for the fraud.”

Another user in comments countered that “MEDICAL COLLECTIONS IS AGAINST HIPAA LAWS.”

This is not necessarily true, per HHS. “The Privacy Rule permits covered entities to continue to use the services of debt collection agencies,” the agency stated.

However, “the medical facility can not disclose the nature of your treatment to the collector,” Cynthia Hoover of Tough Nickel wrote. “If by chance a medical collection does provide you with the details of your medical bill (i.e., treatment) they may be in direct violation of HIPAA regulations, facing fines (payable to you).”

“This means that if you’ve paid your medical bill in full and the debt is still sitting on your credit report as a negative mark, this negative mark will now be removed,” the report continued.

Other users on TikTok stated that, while American medical bills may be high, Americans enjoy a standard of care not seen in other countries.

“I agree hospitals bills are crazy high.. but I’m glad we can all go to any clinic and ER and get a bed to lay down when in pain instead of other countries that can’t afford anything and their people have no hospitals or doctors to go to,” a commenter claimed. The commenter later cited Cuba and “other countries” as examples of poor healthcare.

The data does not support this claim. Writing for HuffPost in 2006, Blake Fleetwood explained that “figures from the World Health Organization clearly show that The United States lags behind 36 other countries in overall health system performance ranging from infant mortality, to adult mortality, to life expectancy.”

Additionally, Cuba “has better infant and adult mortality rates than the US, and has a life expectancy nearly equal to [the US],” per the article.

However, responding to these issues by simply not paying one’s medical debt could lead to further issues. A 2019 article in the Atlantic cited persistent collectors and potential lawsuits as some of the many reasons why people might consider pay off their medical bills however possible.

Some users on TikTok aren’t convinced.

As one user wrote, “Child. Hospitals and student loans will NEVER get a dollar from me!”

The Daily Dot reached out to @killbillevol1 via email.