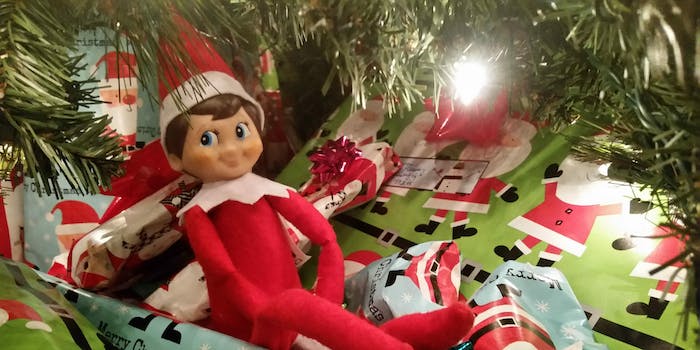 People are really upset about these NSFW elf toy ads

Some expressed disgust—or were purely baffled by the lewd ads.

This isn’t the innocent Elf on the Shelf your mom loves.

Oh Elf, we know it’s nippy outside but not that kind of nippy! #ElfBehavingBad pic.twitter.com/kYMNruqLda

In one, the elf rides a plush donkey and says, “Don’t tell Santa I’ve found a new piece of ass.” In another, the elf appears to draw breasts on a car window.

One particularly controversial ad shows the elf dangling a bag of tea over a female doll wearing a T-shirt that says “Power.” “How do you take your tea? One lump or two?” the original caption said.

Writer Caroline Criado Perez said the image directly attacked the #MeToo movement, which was sparked by women coming forward to share their experiences with sexual assault and sexual harassment.

“Baffled that @Poundland or in fact anyone with human empathy would do this,” Perez wrote.

An organization that supports victims of domestic abuse wrote, “How do you take your social media posts? One lump of outdated misogyny completely ignoring the current international agenda, or two?”

How do you take your social media posts? One lump of outdated misogyny completely ignoring the current international agenda, or two? 💁‍♀️@Poundland https://t.co/3imNJlC7u3

Twinings Tea, which was featured in the tea bag ad, said it had “no involvement” in the image and that the ad “misuses” its product.

Only in 2017 could Poundland get into an awkward situation with Twinings Tea over a miniature elf figurine teabagging another plastic toy pic.twitter.com/KIlMhdSOiZ

We are aware of an image that is circulating that misuses our product. This is to confirm that we had no involvement in this and that it is obviously not reflective of our brand values.

In response, Poundland removed the image and added a new one—this time, there’s no box of Twinings Tea in the background. The caption says, “Spot the difference…”

Others expressed disgust—or were purely baffled by the lewd ads.

merry christmas to everyone except poundland’s marketing team pic.twitter.com/yJHjfSlqdc

is everything okay at home? @Poundland pic.twitter.com/TcIaPYfve2

Not everyone was offended. Some said they found the elf images “hilarious.”

FFS just read some of the tweets in uproar at Poundland's tweet.
I really do not want to live in a society run by these dull dull sanctimonious tw*ts. Go get a life to replace the one you've wasted you boring people.

Poundland’s account responded to suggestions it had been hacked, saying that was not the case.

Hi Mark. The Poundland account has not been hacked. I am sorry that you feel this way and will share your feedback. Thanks, Zoe

Poundland’s marketing director Mark Pym defended the elf toy campaign, claiming it cost the company only about $30 to make.

“If you think this is edgy, you should see the ones we didn’t post,” Pym told London’s Evening Standard. “The love on Facebook is overwhelming—that’s because it connects with our shoppers. In fact, we’re proud of a campaign that’s only cost £25.53 and is being touted as the winning marketing campaign this Christmas!”

The Standard reported that the Advertising Standards Authority has received at least eight complaints about the vulgar holiday-themed posts.