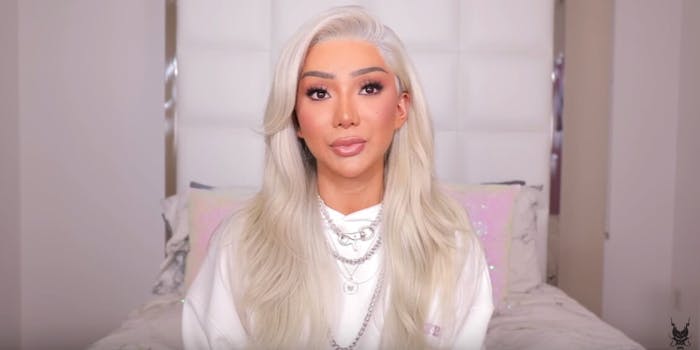 Nikita Dragun accused of blackfishing amid baffling tweet about race

Many fans didn't think her joke was funny.

Nikita Dragun is under fire for blackfishing and racially insensitive tweets.

The YouTuber, makeup guru, and model, who claims to be Asian- and Mexican-American, was attacked by multiple Twitter users who claimed Dragun was attempting to gain attention by making light of sensitive issues like racism.

Dragun refused to apologize though, defending her “joke” with a follow-up tweet: “i know it’s a joke to comment on my race but i’m really tired of having to defend myself on every post. ‘she’s hispanic today’ i’m hispanic everyday. my mom is mexican. my dad is asian. i’m mixed. the end. bye.”

Her justification seemed to fall on deaf ears. Many users called Dragun out, asking her why she seems to always try to look Black on her social media.

One user tweeted, “then explain why you always look black. quickly.”

In yet another tweet within the same hour as the first, Dragun stated, “growing up mixed i was never enough or fully accepted. i don’t have to pick a side. i am not incomplete of my races. i do not lack anything. i am proud of ALL of me.”

However, her fans don’t want her to “pick a side,” they want her to stop blackfishing and take accountability for her racially insensitive comments.