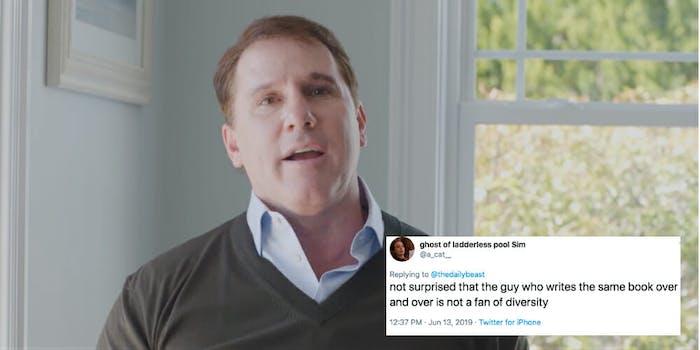 Nicholas Sparks tried to ban an LGBTQ club from his school

Sparks is denying the allegations.

Authors Nicholas Sparks and Stephenie Meyer are in hot water following allegations of homophobia and racism.

Sparks allegedly tried to keep an LGBTQ organization from forming in the Christian academy he co-founded, the Epiphany School of Global Studies. He also tried to ban student protests from happening, according to the Daily Beast.

Sparks tweeted that the accusations made against him were “false.”

The director of the first Twilight film, Catherine Hardwicke, also told the Daily Beast in October that the Twilight series author, Stephanie Meyer did not want a Black actor to play a non-villain role in Twilight. The story has once again garnered interest after resurfacing through BET.

Former readers of the two authors’ works were posting their reactions to the allegations on Twitter.

The tea is scalding! #Twilight director says she wanted more actors of color in the film, but author Stephanie Meyer resisted https://t.co/Ak51KgAarJ pic.twitter.com/h4F7pCMZEk

Some fans were disappointed, but not entirely surprised that the author who only writes heteronormative love stories might be homophobic.

“Not surprised that the guy who writes the same book over and over is not a fan of diversity,” one Twitter user wrote.

“Wow,” another wrote. “Not surprised. Twilight was my emo teenage obsession. sucks but not at all surprised.”

OH … we been knew stephanie …. Laurent is like the only one and Taylor Lautner isn’t native american

The Daily Dot has reached out to Stephenie Meyer and Nicholas Sparks.