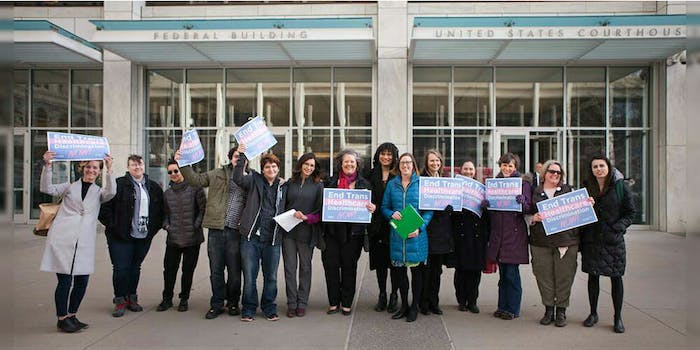 Gender Justice is using the law to push back against a destructive administration.

You wouldn’t guess the massive effect Gender Justice has had on national policy if you stepped into their office. Tucked away above a bank in a plain building, and only a ten-minute walk from the Minnesota state capitol, the office was quiet on a Wednesday afternoon, sparsely decorated with donated art. The team may be small—under two dozen people—but they work with precision to create big change. One case and one law at a time, Gender Justice is leading the Midwest charge toward equality for all genders and sexual orientations.

“Our mission is to eliminate gender barriers using the law,” staff attorney Christy Hall explained. “We do that through litigation, we do it through public advocacy, and we do it through education work.”

When I asked what she specifically does for the organization she answered with a laugh. “Primarily, I sue people, which I enjoy.”

Gender Justice has been around since 2010 when co-founders Jill Gaulding and Lisa Stratton left their positions at the University of Minnesota Law Clinic to found the organization and focus their work on gender discrimination. Their first case was one they carried with them from the law clinic, representing an undocumented immigrant who was sexually assaulted by her boss and threatened with deportation. That case is emblematic of their work, which sees the fight for gender equality as intersectional across different spheres of oppression. While they’re only able to take a few cases at a time due to their size, their strategy is to take ones that will have the biggest impact on policy. Besides litigation, Gender Justice also lobbies for gender equality and works to teach people about what their rights are in regards to gender discrimination, so they can be empowered to fight back.

One lawsuit Gender Justice is currently engaged in is of particular interest both to me and to the national fight for trans rights. In 2011, I graduated from Minnesota’s Anoka-Hennepin school district, which had been declared a “suicide contagion zone.” Nine students killed themselves over the course of two years after a “Sexual Orientation Curriculum Policy” was introduced, requiring teachers in the district to remain neutral on issues of sexual orientation. In January 2011, my high school was sued for not allowing a lesbian couple to walk together as winter dance royalty. A month after I graduated, the U.S. Department of Justice confirmed they were investigating the district over a civil rights complaint. The policy was repealed in 2012, and replaced with the “Respectful Learning Environment Policy.”

Now, over half a decade later, the fight for equal rights for LGBTQ students in Minnesota’s largest school district continues. A trans boy had been using the boy’s locker room to change with his teammates on the boy’s swim team for months without incident until the school board singled out the young man and made him change separately, a decision the boy’s mom says emboldened bullies. His mother told Gender Justice, “I didn’t choose this battle. The school board chose us. They used their power and went out of their way to create a problem where there wasn’t a problem to begin with. They conspired to isolate my son.”

This sentiment was echoed by Hall when I asked her why these problems keep occurring in the state’s largest district. “The Anoka-Hennepin case is in part about a politically active school board that is intent, actually, on discriminating against LGBTQ students,” she said. “You have some school board members, or super involved community members, who push this agenda to the detriment of the rest of the school district.” Hall says that many people who work in schools want to provide safe learning environments for trans students, but the Trump administration has made that difficult.

“The Trump administration has made things more confusing for many school boards by taking the Obama-era guidance given to schools”—the assurance that Title IX protections applied to trans students, and sharing best practices for supporting them —“and saying well this is no longer in effect,” explained Hall. “What should you do instead? [The Trump administration] is just not going to say.”

The result of this, according to Hall, is that many school faculty don’t even know what they’re even allowed to do. Hall says that by going after Anoka-Hennepin, Gender Justice hopes to “clarify the law for other schools that want to do the right thing and are maybe confused.”

In March, the Minnesota Department of Human Rights joined Gender Justice in its lawsuit against the Anoka-Hennepin school district, a sign of hope and a reminder of the effect shifts in power, even on a local level, have on vulnerable populations. Keith Ellison, a long-time supporter of LGBTQ rights, won the Minnesota attorney general’s seat in November, but had his opponent won, the state may have had a very different approach.

Ellison’s opponent in that race, Doug Wardlow, had a personal hand in encouraging the Anoka-Hennepin school district to discriminate against trans students. In the year before running for attorney general, he wrote a letter to the school board and spoke at a school board meeting, attempting to convince them that trans students using the bathroom of their choice are a threat to cisgender students, and that requiring students to not purposefully misgender their trans classmates (also known as bullying) was a violation of freedom of speech. His position was, in essence, attempting to “re-interpret” the part of the Minnesota Human Rights Act that protects trans people from discrimination. “Fortunately for our client, Keith Ellison has made enforcement of the Human Rights Act a priority for that office,” said Hall. While fighting for trans students in schools, the state Department of Human Rights under Ellison has also gone after companies like CSL Plasma for discriminating against trans folks.

Local protections and policies feel even more vital as the federal debate over LGBTQ civil rights comes to a head in Washington, D.C., this year. Repeated attacks on LGBTQ rights from the Trump administration have given the Equality Act, which is currently stuck in committee in Congress, more urgency than previous attempts at such federal protections for LGBTQ rights. Meanwhile, the Supreme Court will be hearing two cases in the fall that will determine if employers can legally fire people for being LGBTQ.

According to Hall, much of the upcoming federal debate on LGBTQ civil rights will be increasingly tempered with arguments for “religious refusals.” While some people see this as an issue of religious freedom versus civil rights, others argue that religious refusals are in fact a restriction of religious freedom, in that any religion outside of Christianity will not be weighed with the same power. “A part of the First Amendment, religious protections in the Constitution include not establishing a religion,” explained Hall. “These [anti-LGBTQ] restrictions are sought by people who want to discriminate against LGBTQ people, people primarily coming from some Christian faith traditions that you can see this conflict as an effort by some to establish a religion by saying, ‘Our religious beliefs about this particular group of people are more important than anything else.’”

Hall says that Gender Justice doesn’t anticipate the Equality Act passing in the near future, but that if it did, it would make a big change for fighting discrimination. However, with SCOTUS hearing cases on LGBTQ employment discrimination in the fall, that leaves the Equality Act in a precarious place. While the majority of court opinions in the country reflect a judicial recognition that LGBTQ people should not be discriminated against, a conservative Supreme Court, with the addition of Justice Brett Kavanaugh, could change everything. “Nobody knows what the Supreme Court will do with current law,” said Hall. “They could totally screw up current law by coming out the opposite way from the majority of courts in the country.”

The nature of fighting discrimination is often, it seems, one step forward and two steps back, entirely due to shifting political tides. Gender Justice tries to mitigate potential damage on the local level by meeting with state legislators to educate them on trans issues, but not everyone can be won over.

After beaming about this work, she then paused and continued with more melancholy. “And now we’re holding on, clawing, saying, ‘Please, don’t take these away!’”