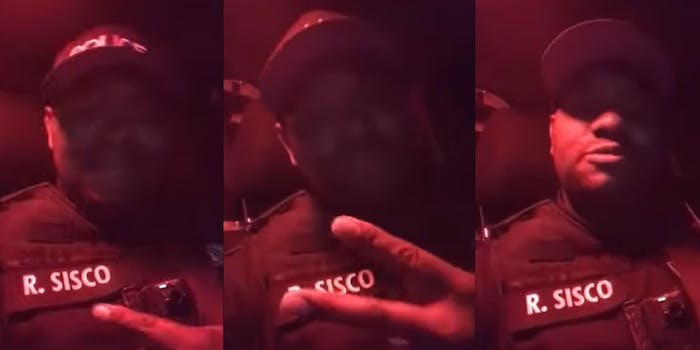 Given the public reckoning U.S. police officers are currently facing and the speed with which their blunders go viral on social media, you might think cops would stop filming their tone-deaf, racist, and transphobic rants. Apparently, some cops didn’t get the memo.

That includes Robert Sisco, a police officer in New Paltz, New York, who was placed on administrative leave this week after he filmed himself performing a rap that promoted transphobia and conspiracy theories about Hillary Clinton and Jeffrey Epstein.

The video shows Sisco wearing his police uniform, sitting in what appears to be his car and looking into the distance when a beat starts to play. He looks into the camera and delivers his minute-long rap. Here’s a sample of the lyrics, including the offensive passages:

There’s only two genders and Trump’s still your president

Boys have a penis and girls have a vagina

This whole coronavirus was sent here from China

Hillary is Killary we all know the reason

Where those emails at? We should hang her for treason

But we all know Epstein didn’t kill himself

Unsurprisingly, the video was not a hit with New Paltz residents, many of whom demanded Sisco’s termination. The town addressed the video in a Facebook post on Tuesday, announcing that the police department had placed Sisco on administrative leave as it conducts an investigation.

“We are so sorry that the trust of many in our community has been broken and that their safety feels threatened,” the town’s Facebook page wrote. “No one in our town should have to feel that way about our police.”

In the statement, the town said the New Paltz Police had initiated an internal investigation and that the officer is on administrative leave.

“We are all committed to repairing trust with our New Paltz transgender and LGBTQ+ community members,” the town wrote.

Maybe Sisco should try rapping about McDonald’s next.