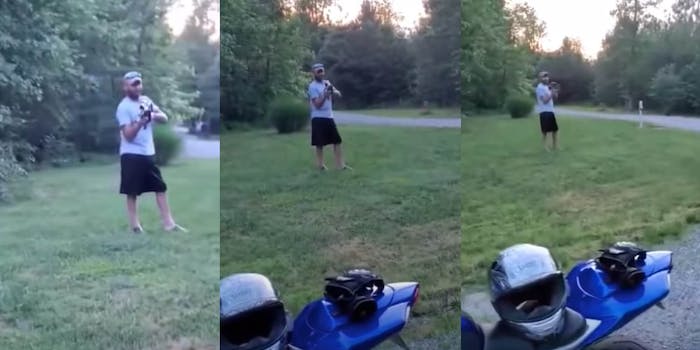 'All we're doing is standing here.'

A Virginia white man is facing charges after a viral video showed him pointing an AR-15 rifle at a group of Black bikers.

Dennis Lee Berry approached then men holding his rifle just a few minutes after the motorcycle bikers decided to take a break in his neighborhood on Sunday night. Berry said he had a gun because the bikers were on private property. That’s when one of the bikers started filming.

“I’m going to take you out first,” Berry said as he gets closer to the bikers.

The bikers try to explain that they’re just stopping to take a quick break and that one of the men used to live in the neighborhood. Berry shot back saying they were on private property. The men responded that the only private property sign they’ve seen is “all the way up” on Berry’s driveway.

“Parked my bike over here to take a break real quick,” a voice narrating behind the camera says. “I got a white guy here pointing a gun at four Black men. Look at this. All we’re doing is standing here.”

The men decided to call the police. As they wait, the bikers explain that they do not have guns and that they’re calling the cops and doing nothing to threaten the man. The bikers also express being nervous about Berry being “trigger happy.” Despite all of this, Berry continued to point the gun at the men.

When the officers arrived, they arrested Berry and charged him brandishing a firearm. He was released on a $5,000 unsecured bond and his rifle was taken away for evidence in the case.

It appears that someone who knew one of the bikers posted the video on his official YouTube account, where he has more than 810,000 subscribers. That’s when it migrated to Reddit, where it continued to rack up views.