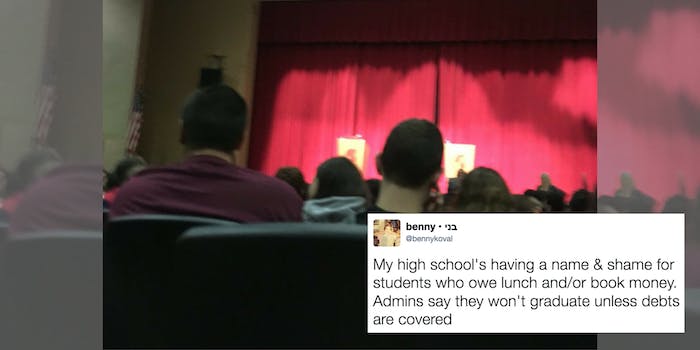 People online are offering to pay off the debts of those who were told they couldn't graduate.

Twitter users are offering to fund the debts of graduating seniors at a New Jersey high school after the school allegedly “named and shamed” students who would be unable to graduate if their lunch debts went unpaid and their textbooks unreturned.

According to Benny Koval, a senior student at Fair Lawn High School, the school read out the names of students with lunch debts and overdue textbooks during a senior class assembly regarding graduation preparations.

Koval, who tweeted an image of the event, said the “shaming” portion of the assembly lasted about 30 minutes and spanned two lists of student names. According to Koval’s friend AJ Fiedler, another Twitter user who was also in attendance, seven pages of names were read in total, six of them for lunch debts.

My high school's having a name & shame for students who owe lunch and/or book money.
Admins say they won't graduate unless debts are covered pic.twitter.com/RTAdIpyeos

This literally can't get any more awkward. These students must feel so uncomfortable

The first three kids who were called up were mocked — maybe by friends, maybe not. Regardless, my fists are fucking clenched

Koval tweeted the single image of the assembly as well as other details about the name-reading but says he didn’t take video footage because administrators had threatened to confiscate phones.

Speaking with the Daily Dot via Twitter direct messages, Koval said that students with overdue books had to come to the stage, though wasn’t sure if it was to retrieve paperwork, while students with lunch debts remained seated. Students whose names were called were initially laughed and jeered at by classmates, possibly by friends, but the teasing stopped once students became bored.

“The assistant principal also said something weirdly specific which made my stomach churn. Something like, ‘If you thought you would get off the hook when you didn’t return that 9th grade biology textbook, well…'” Koval told the Daily Dot.

Fiedler told the Daily Dot that they hadn’t spoken with anyone whose name was called but overheard a student recounting her classmates’ amused reactions when her name was called. Fiedler thought their name would have been among the names called.

“I personally was expecting to be called, because last I checked I was in lunch debt,” Fiedler told the Daily Dot. “[I felt] fairly anxious, honestly, but mostly embarrassed. The ladies who run the register usually look at you with vague disdain if you owe money, so I generally avoid getting lunch if I have too much debt on my account.”

Koval’s tweets were immediately met with shock and stories from other people who had also encountered “naming and shaming” tactics at their own schools. This shaming in public schools, often called “lunch shaming,” is a method typically used to shame and guilt students into paying back debts owed if they don’t have enough money to cover their lunch. In other words, it often publically humiliates and stigmatizes less well-off students.

Yes, let's shame teenagers who are about to enter the poorest part of their lives for not paying measly debts. Fuck the system. https://t.co/0oDD6yTMgH

I organized a successful movement which resulted in a collective lawsuit against the Law School and our lawyer was successful.

My h.s. announced the names of free lunch kids on PA and then made us line up in front of the entire cafeteria every month to get cards.

I was one of these students…having my debts posted on a bulletin board…if my mother didn't force me I'd have never picked up my diploma https://t.co/GPyUJaGV0C

There wasn't a name & shame but mine threatened I wouldnt graduate as well when my family could barley afford food. https://t.co/KpSqJgqhAW

Calling out students who may not have the means to pay these debts is horrific. Shame on the school. https://t.co/Oza6jgWlFZ

Among the upset responses were Twitter users who offered to pay the debts of students who would be unable to walk otherwise. Several asked Koval how they could assist, while some called the school and asked if they’d be able to donate to the accounts of the indebted students.

Come on, Twitter, channel some of your Wednesday rage into paying off lunch + overdue book debt so kids can graduate high school. https://t.co/USOWs20DGG

If you ever run for office, I'll campaign for you. I just called the school, they said I can come pay off someone's debt.

Hi Benny, do you know how people can donate to pay off students' debts and when graduation is?

Hey, Benny. How do we help pay off a fellow student's debt? I am in.

Fair Lawn Schools Interim Superintendent Dr. Ernest Palestis did not immediately return Daily Dot’s request for comment regarding the assembly. But according to Eoin Higgins, an independent reporter who reached out to the school, the school denied the existence of the shaming practice—and then called the debt relief needed to attend graduation students’ “obligations.”

However, Koval said the school has backtracked on its denial, particularly when contacted by strangers wishing to pay for student lunch debt. Koval said names of minors were relayed to strangers wishing to pay lunch debt of Fair Lawn students—according to one direct message screenshot shared with the Daily Dot between Koval and a Twitter user who called into the school, the school said the only way to pay student lunch debt would be to pay off an individual student’s account.

At the time of the assembly, Koval and Fiedler shared their disgust for the school applying tactics often used against students in poverty—some of the Fair Lawn students live in Paterson, which Koval says is a more economically impoverished neighborhood. But ultimately, Koval, a self-proclaimed “angry socialist,” shared the bizarre assembly to expose the school.

“I understand the power of the internet,” Koval said.