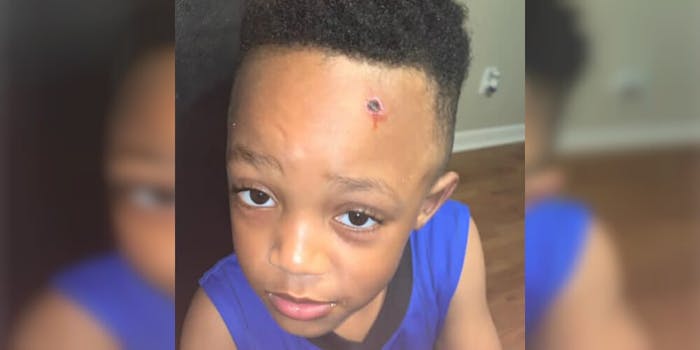 The mom said a bullet wound is ‘too much’—even for Halloween.

An Alabama elementary school has issued an apology after the mother of a student shared an image of a fake bullet wound a teacher painted on her son.

With Halloween just over a week away, spooky spirits are high. Unfortunately, every year there are some people who don’t quite grasp where the line is between fun-scary and sad-scary. According to Zakiya Milhouse, a teacher at her 7-year-old son’s elementary school crossed that line last week during a theater class, the Root reports.

Milhouse was shocked when her son Amonn Jackson came home with a realistic-looking bullet wound on his forehead. “If you saw it in person, it looked real,” Milhouse told AL.com. “It was supposed to be a gunshot wound. That’s when I got upset.”

Although she had signed a permission slip for Amonn to have makeup put on him for theater class, she said a bullet wound is “too much.” She felt it was inappropriate due to rampant gun violence in schools and against young Black men.

She posted a picture of Amonn with the fake bullet wound on Facebook, saying “I don’t care if it’s Halloween or NOT!”

Many of the comments shared Milhouse’s anger at the teacher and school. “He needs to be f****** fired, I don’t like it not one bit. We are losing our black men everyday,” a relative wrote.

“People go to school for body painting and get paid good money to do this kind of work,” another commenter said. “But do agree the gunshot to the head was inappropriate for his age.”

Not long after posting the picture of the painted bullet wound, she received a call from the school principal and the teacher to apologize. The teacher explained that it was for a unit on theater special effects but said he would remove that part of the lesson plan. Birmingham City Schools also issued a public apology, stating that while there was “no malice was behind the depiction” the district “does not condone the graphic nature of this lesson on special effects.”