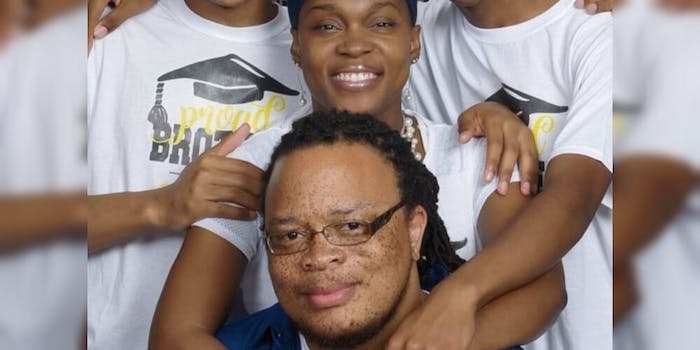 Cher offered to help him sue the school district.

Local and online communities are rallying around a Black high school security guard in Madison, Wisconsin, who was fired after he told a student to stop calling him the N-word.

According to BuzzFeed News, Marlon Anderson had been working at Madison West High School for 11 years before he was fired last week. While removing a disruptive student from the school, the student allegedly called Anderson the N-word. He told the student not to call him that, repeating the slur in the process. The Madison Metropolitan School District has a zero-tolerance policy for staff using racial slurs, and in spite of the context, Anderson was fired.

Anderson shared the news in a public Facebook post, which quickly drew sympathy both from his community and people online. A Change.org petition to get Anderson his job back has gotten over 12,000 signatures.

On Friday, hundreds of students at Madison West High school, as well as many staff and teachers, walked out and marched over a mile and a half to the school district’s office. Among those protesting was Anderson’s 17-year-old son, Noah. The biggest criticism of the zero-tolerance policy is that when the context of racial slurs is ignored, racial minorities are punished for trying to educate people or defend themselves. At the protest on Friday, Noah said his dad had tried to make the incident with the student “a teachable moment from an African-American male to a younger African-American male.”

Anderson posted about the protest on Facebook, saying, “I am overwhelmed by the love.”

I have cried so much watching you guys on social media my head lost weight, I am overwhelmed by the love when I get back…

Social media has carried Anderson’s story far and wide. On Twitter, Cher offered to pay for his legal fees if he wanted to sue the Madison Metropolitan School District.

How Can Ppl Be This Disrespectful⁉️A Beloved,Man of Color Just Passed,& Our Nations Mourning Him.Cong.Elijah Cummings FOUGHT FOR JUSTICE.He Was loved & Feared. If You Want To sue MMSD Ed.Board I Will Incur Your expenses.🕊EC

The Madison, WI school district needs to grow a brain, and a heart, really quickly!
I’ve seen some crazy things over the years, but this is one of the worst.
Just more evidence our country still can’t handle issues of race, and racism. https://t.co/gX2B91qLEx

Several of Anderson’s colleagues set up a GoFundMe to raise money for his family. “He is an exemplar of Black Excellence and is a role model for students and staff alike,” the page says. “Now more than ever, we have to protect and uplift our own while our beloved Marlon and his family go through this unnecessary ordeal.”

Update 1:58pm CT, Oct. 22: Marlon Anderson’s pay and benefits have been reinstated, and he is negotiating with the school to return to work, the Root reported on Tuesday.

“I’m back!!” Anderson wrote in a Facebook post on Monday, adding that the superintendent of the school district had “rescinded the decision” of his firing. Anderson thanked his family, students, and online supporters who protested that he had been wrongly fired. “Now we have to address the policy!! God is good!!!!”

I'm back!! While at work today at Boys & Girls Clubs, I learned from the Madison Teachers Union President that School…