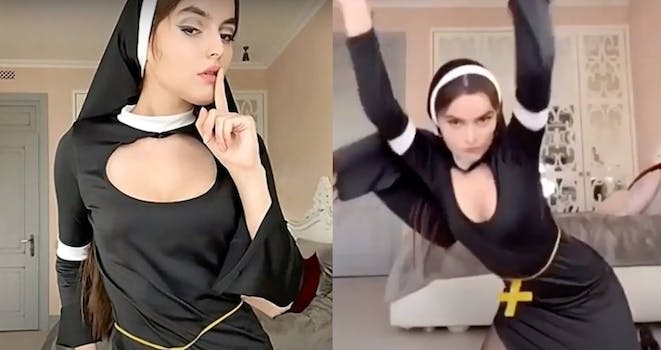 She had to go to the police.

A Russian Instagram influencer is receiving threats after she posted a video of herself dancing in a nun costume, according to multiple reports.

The model, identified as both Yana and Yara in the reports, shared a video of herself wearing nun’s clothes, revealing her neck and parts of her legs, to her reported 60,000 followers.

The text on the video is in Russian, and the Daily Dot was not able to independently translate it.

She starts with praying hands, before kneeling on one leg and twerking for the camera. She then does other dance moves, showing glimpses of her legs through the slits in her costume.

She also bows in front of the camera later in the video.

According to news reports, the caption of her video read, “Would you want this religious grandmother to like you?”

According to British tabloid Mirror UK, the video was viewed by more than 200,000 people, with some leaving Yana threats.

“People are threatening me from fake accounts, mostly written, but there was also a voice message, a long one,” she said, per Mirror UK.

Buzz.ie reported that she eventually went to the police and is now waiting to hear back.

The video was reportedly uploaded seven weeks ago. Neither her account nor the video came up when the Daily Dot ran a search for them on Tuesday afternoon.