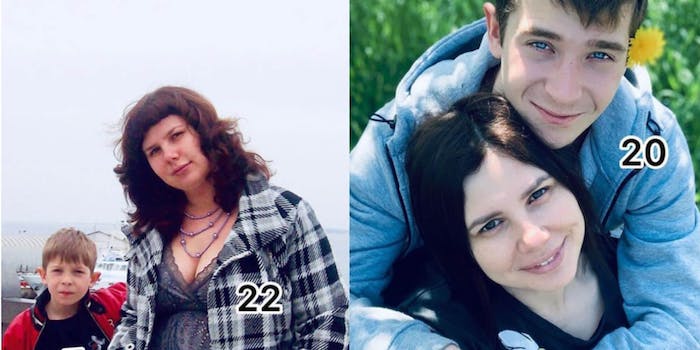 She recently shared an old photo of when he was only 7.

According to various media reports, blogger Marina Balmasheva has been raising her husband-to-be, Vladimir, since he was a child. There’s a 15-year age gap between the two.

In what appears to be an attempt to win over the masses with the—er—unconventional coupling, Balmasheva posted a photo to her Instagram of her and her now-fiancé from 13 years ago. At the time of the photo, he was only 7. She was 22.

Right next to it, Balmasheva posted a photo of what the couple looks like now.

“You never know how life will turn out and when you meet a person who makes you smile,” she commented on her own post, which has been translated to English. “I know that some will judge us, others will support us, but we are happy and wish you to be as well.”

Balmasheva, an influencer from the western Russian region of Krasnodar Krai, has unsurprisingly received a lot of backlash for the relationship.

Although many of the comments left on the post were in Russian, when roughly translated they were largely critical of the couple’s decision.

According to reports, one person commented, “What shocks me the most is that this boy grew up before her very eyes.” Others made crude comments on how she’s ditching an older man for a younger model.

Balmasheva was 22 when she first married and lived with her husband, Alexey Shavyrin, 45, for over 10 years before they got divorced.

But Balmasheva maintains she’s very much in love with Vladimir and plans on helping to raise three of his five siblings, according to reports.