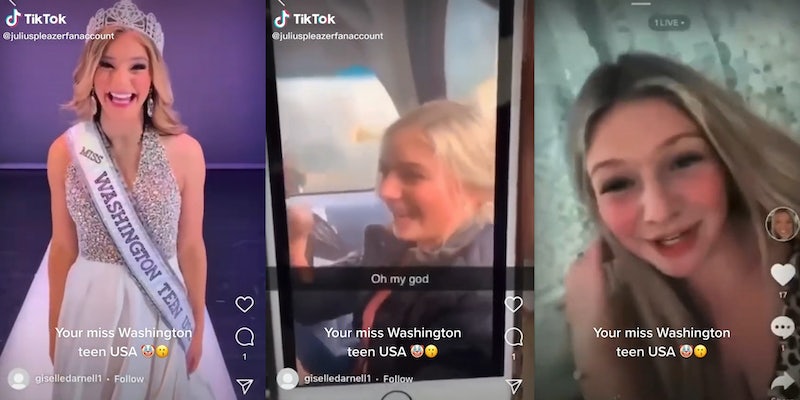 The pageant organizers have reportedly been aware of the video since October 2020.

The video, shared by user @juliuspleazerfanaccount, received over 7.7 million views. The TikTok also shows Dixon and a friend lip-syncing to a popular TikTok audio: “I’m Amber. I only love men when they have money and big cocks.”

Dixon told FOX 13 Seattle she was pressured by upperclassmen to say the N-word.

“They coerced me into saying a racial slur. I told them ‘no, I don’t want to say that,’” Dixon told FOX 13. “I know that it’s not appropriate. And they told me ‘you have a free pass just this one time, it would be funny.’ So I decided, after much persuasion, I said the word that they wanted me to say and without my knowledge I was recorded.”

According to FOX 13, the organizer of Miss Teen USA in four states, Pageants Northwest, was already aware of the video, taking it into consideration of Dixon’s application in October 2020. However, after a conversation with Dixon and her family, they allowed her to continue to compete for the Washington state title.

Dixon said the video resurfaces every time something happens in her life, according to FOX 13.

“Honestly having gone through this experience, I feel like you don’t realize the true meaning of how something can affect you that’s posted online until you’re caught in a situation like mine. Where something negative from your past, because it being on social media, comes to resurface again,” Dixon said.

The title-holder then apologized for using a racial slur.

However, many users were outraged and said Dixon’s title should be revoked.

“Take her crown back,” one TikToker urged.

“Y’all it’s about her having to hold up a very big reputation and title and her doing the complete opposite,” another said.

“To show racism is still at the heart of this country,” a third noted.

“That title needs to be ripped away from her. You have a standard you have to uphold and that’s very clear in your application,” a fourth user urged.

The TikToker also shared broadcast footage from KIRO 7 about the incident, including an interview with third runner-up Hannah Merritt. She similarly shared her disappointment in Pageants Northwest.

“As an African-American woman who’s walked that stage four times and has the weight of so many little girls on my shoulders, to know that Kate, who will never understand that, won, it’s just really tiring,” Merritt says.

The Daily Dot reached out to Miss Teen USA via email.