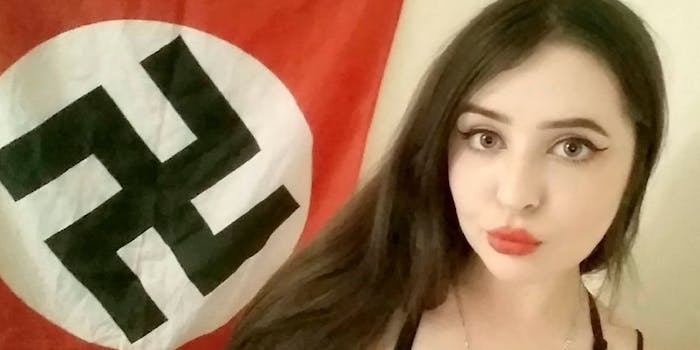 Alice Cutter participated in the pageant as 'Miss Buchenwald,' a reference to a concentration camp.

A woman who was jailed for belonging to U.K. neo-Nazi group National Action was formerly a contestant in a “Miss Hitler” beauty pageant.

Alice Cutter, who participated in the pageant as “Miss Buchenwald”—a reference to the Buchenwald concentration camp in Nazi Germany—received a three-year sentence for being linked to National Action. Her former boyfriend, Mark Jones, was considered a leader in the group and was jailed for five-and-a-half years.

National Action, a far-right political group, was proscribed as a terrorist organization in the U.K. in December 2016 after it supported Thomas Mair, the murderer of Member of Parliament Jo Cox. Mair killed Cox because of his far-right beliefs, and National Action endorsed the killing, telling people not to “let this man’s sacrifice go in vain.” The group also called for violence against police in the U.K. and applauded the Orlando nightclub shooting that occurred in 2016.

After National Action was declared a terrorist organization, it became a crime in the U.K. to support or be a member of the group. Cutter came across the group in mid-2016 and said she was encouraged to participate in the Miss Hitler competition run by National Action’s founder, Benjamin Raymond.

According to the Independent, the Miss Hilter pageant was a publicity stunt designed to draw in new, younger members to National Action’s cause. In some cases, Cutter referred to herself as “the Buchenwald princess.”

Part of the group’s youth outreach included trying to recruit members as young as 16. Jones eventually cheated on Cutter with a 16-year-old he was trying to recruit, leading the pair to separate.

Cutter was arrested along with Jones when police discovered the group was holding meetings after its ban and designation as a terrorist organization. Both Cutter and Jones denied any further affiliation with the group, but were nonetheless convicted.

The Daily Dot has reached out to the police department where Cutter was booked.