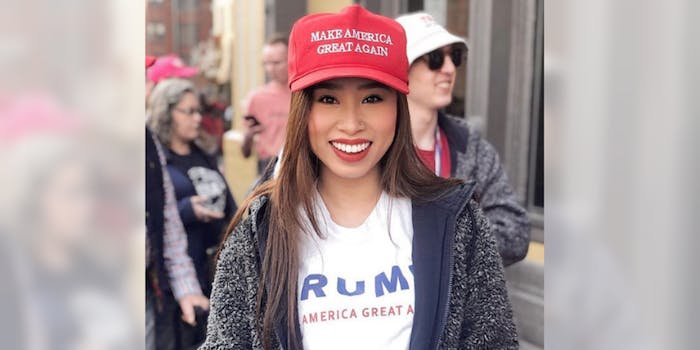 'Obviously I am not racist or stuff like that.'

Zhu continues to stand behind her tweets and is claims that she’s facing discrimination based on her conservative beliefs.

“This is so much bigger than pageantry. This is about, you know, an organization discriminating against people with different opinions,” Zhu said in a video she posted to Twitter on July 19.

Miss World America took away Zhu’s title in response to two tweets, both of which have since been deleted.

In 2018, a Muslim student organization on her campus was celebrating World Hijab Day. A student offered to let Zhu try on a hijab, and she declined. She then tweeted about the interaction, according to ThinkProgress.

“There is a ‘try a hijab on’ booth at my college campus. So you’re telling me that it’s now just a fashion accessory and not a religious thing? Or are you just trying to get women used to being oppressed under Islam?” she tweeted.

She has since defended the tweet that many are calling Islamophobic. Zhu transferred schools–to the University of Michigan–following the negative reaction she received to the tweet.

“I said that it was (getting women used to) being oppressed because there are so many women in Middle Eastern countries that are being punished and stoned for refusing to wear a hijab,” Zhu told USA Today. “Nobody is talking about that in the West because all they see is everyone being at peace, but that is the beauty of America.”

The second tweet in question was one of her responses to a social media user.

“Did you know the majority of black deaths are caused by other blacks? Fix problems within your own community before blaming others,” Zhu tweeted.

Zhu told USA Today that this information applies to all communities and not just the Black community, adding, “Obviously I am not racist or stuff like that.”

Since her title was revoked, Zhu has been active on Twitter defending herself and responding to conservative supporters.