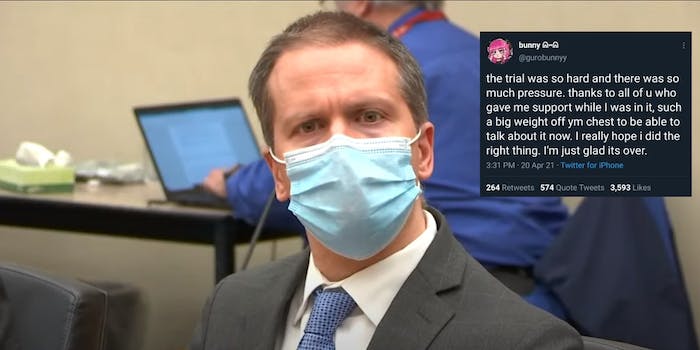 Anyone paying attention should've realized that gurobunnyy was not on the jury.

Yesterday’s verdict in the Derek Chauvin case was perhaps the biggest news event since the 2020 election. Chauvin, a former Minneapolis police officer, was convicted of murdering George Floyd, the unarmed Black man who died after Chauvin knelt on his neck for nine minutes in a video that sparked a summer of protests and outrage last year.

People flocked to the internet to weigh in on the verdict.

One person chose that moment to tweet about serving on a jury. They swiftly found themselves at the center of a backlash that included death threats.

Soon after the verdict was announced, Twitter user @gurobunnyy tweeted, “The trial was so hard there was so much pressure. Thanks to all of u who gave me support while I was in it, such a big weight off my chest to be able to talk about it now. I really hope I did the right thing. I’m just glad it’s over.”

gurobunnyy did not respond to the Daily Dot’s request for comment.

Her tweet attracted many fans and quite a bit of lust from those who thought it was a brilliant troll.

“Thank you queen. Here is a snail on a strawberry to show my gratitude,” replied one.

To anyone paying attention, it was obvious gurobunnyy wasn’t really on the jury.

Others noted that none of the jurors matched her description. In a tweet from March, gurobunnyy wrote that she’d just turned 19. The youngest person on the jury was in their 20s. Many commenters nevertheless believed she really was a juror in the Chauvin case.

“This is literally one of the jurors who convicted #DerekChauvin,” tweeted one alongside pictures gurobunnyy had previously posted of herself. “These are the people deciding the fate of America.”

Because of her e-girl aesthetic on her tweets, some expressed outrage that she might be allowed to vote to convicted a police officer.

An “e-girl” is a sometimes derogatory term for women and young girls who are flirtatious or overtly sexual on the internet. Some of gurobunnyy pictures showed her in colorful wigs and cartoonish costumes.

Some of the people who believed gurobunnyy was one of Chauvin’s jurors were outraged.

Within hours, she reported receiving messages from “literal Nazis threatening to kill me [and] dox me,” according to an archive of her account.

While some expressed sympathy for the 19-year-old, others were unmoved.

According to archives, as her account rapidly gained followers and her tweet racked up likes, retweets, and reactions, gurobunnyy admitted that she hadn’t been on the jury.

She then switched her settings to private, per archives. Subsequently, gurobunnyy deactivated or deleted her account. Her legend lives on, however. Claiming someone was “literally one of the jurors who convicted Derek Chauvin” has become something of a meme.

gurobunnyy may be gone from Twitter, but her legend lives on.