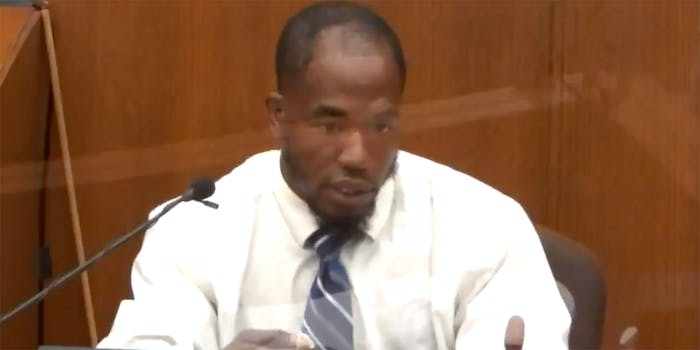 One observer called it 'the kind of visceral, on-the-spot reaction that sticks in a juror's mind.'

Donald Williams, a witness for the prosecution speaking during the opening day of the Derek Chauvin murder trial in Minneapolis, testified that the police officer was utilizing a “blood choke” on George Floyd in the incident that led to Floyd’s death.

As Julia Jenaé from Court TV noted, prosecutors got permission from the court to qualify Williams, who is an MMA fighter, as a martial arts expert. She noted that the prosecution’s initial questions put to Williams centered around that discipline.

“I felt the officer on top was shimmying to actually get the final choke in while he was on top,” he added.

What is a blood choke?

He went on to explain a blood choke “specifically attacks the side of the neck and particularly cuts off the circulation of your arteries and stops the blood flowing from the top of your head to the bottom of your head.”

On Twitter, CNN legal analyst Elie Honig characterized the term as “the kind of visceral, on-the-spot reaction that sticks in a juror’s mind.”

Williams was a bystander who witnessed Chauvin’s alleged murder of Floyd on May 25, 2020, As Huffington Post reporter Hayley Miller tweeted, Williams told the jury what he remembered about Chauvin using the technique on Floyd.

“As time progressed,” he recalled, “the more you see Floyd fade away, slowly fade away and like the fish in the bag, you see his eyes slowly pale out and slowly roll back.”

Williams also claims to have “called out to Chauvin at one point and accused him of using a ‘blood choke.’ Williams said Chauvin then looked up and stared at him ‘dead in the eyes.'”

“That’s the only time he looked up,” Williams said of the incident.

The murder trial is reviving memories of Floyd’s death under police custody, which angered many Americans and led to a wave of national protests last summer around police brutality against Black citizens.

Frederick Joseph, author of The Black Friend, went on Twitter to say, “Black folks, if you need to tune out from the Derek Chauvin trial because it’s triggering, there is nothing wrong with that. Manage your trauma as you need to.”

The New York Times characterized Williams as “the most opinionated of the three witnesses to testify so far,” in part for labeling Chauvin’s actions as “torture.”

The story went on to note that Williams testified “about how many law enforcement officers train at the Minnesota Martial Arts Academy, where he also trains. On the bystander video, he says repeatedly that he went to ‘the academy’ with police officers and that they should know the dangers of what they are doing.”

It also noted that Chauvin’s defense team is “vowing to prove over the course of the trial that Floyd died of a drug overdose and heart condition.”

Saeed Jones also cautioned that “Derek Chauvin’s defense strategy is essentially to put George Floyd on trial; people and news organizations referring to these proceedings as the ‘George Floyd trial’ are knowingly or unknowingly supporting that strategy.”

Williams’ testimony isn’t finished yet; due to a technical glitch with the Court TV cameras being allowed to stream the trial live, Judge Peter A. Cahill adjourned the trial earlier than planned on Monday. Williams will resume his account Tuesday.

One supporter implored in all caps, “PROTECT DONALD WILLIAMS AT ALL COSTS,” registering in her own way the potential impact Williams may already be having on the case.