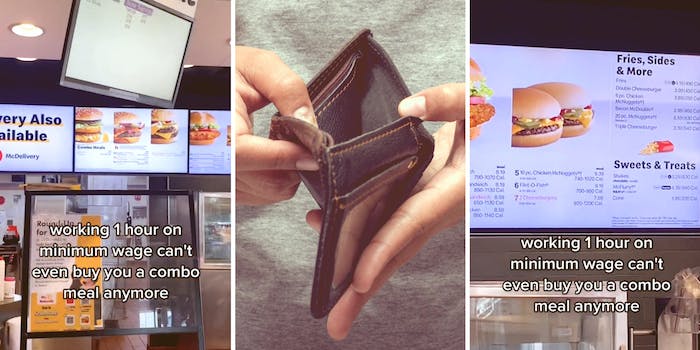 ‘Working an hour minimum wage can’t even buy you a combo’: TikToker shows how workers can’t afford a McDonald’s combo on an hour of minimum wage in viral TikTok

'They have the audacity to raise the prices and still not raise the wage of their workers.'

In a viral video, a TikToker pointed out how the prices of the meals at McDonald’s are higher than the federal minimum wage.

In the video, set to Justin Bieber’s “Yummy,” TikToker @polarpopking records the menu at a McDonald’s location with text overlay that says: “Working [one] hour on minimum wage can’t even buy you a combo meal anymore.”

As he pans to the other items on the menu, viewers see that the combo meal costs more than $9, and other menu items are $7.50 and up.

The video was captioned with the hashtag “FightFor15,” which is a movement among fast-food workers encouraging the federal government to increase the minimum wage to $15 per hour. As of today, the current federal minimum wage sits at $7.25 and has not been increased since 2009.

Many in the comments section of the video expressed their outrage on behalf of minimum-wage workers. “Working an hour and half to pay for the food for your 30-minute lunch break,” one person said.

“And they have the audacity to raise the prices and still not raise the wage of their workers,” another said.

One person claimed that where they live, the minimum wage is $12.75. “Same but there are still states with no state minimum wage so they go off of federal and chains are usually similar in price all over,” the TikToker wrote in response.

The Daily Dot reached out to @polarpopking via TikTok comment and McDonald’s via email.