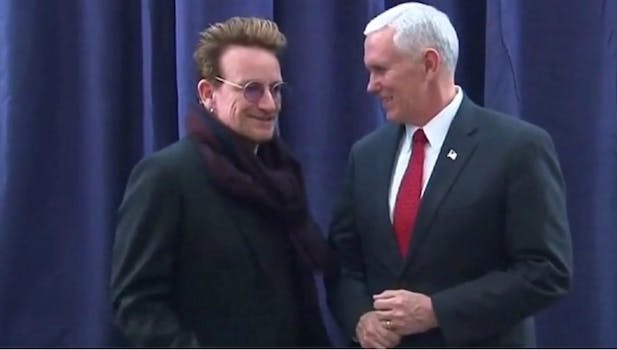 Bono praises Mike Pence’s AIDS relief support, seems to have forgotten his record on the matter

With all the problems that have emerged from the Trump administration, Vice President Mike Pence’s reputation, comparatively speaking at least, appears the cleanest since inauguration.

So clean, in fact, that U2 lead singer Bono met with Pence on Saturday in Germany and thanked him for his past support of AIDS relief.

Bono is referring to the 2003 President’s Emergency Plan for AIDS Relief, which Pence, then an Indiana representative, backed on the floor of the House of Representatives.

“Twice on the House floor, you defended that,” Bono told Pence. “That’s how we know you, and we really appreciate that.”

In 2008 when Congress debated reupping the funding of the emergency plan, Pence said in a speech, “The Bible tells us, to whom much is given, much is expected,’ and I believe the United States has a moral obligation to lead the world in confronting the pandemic of HIV-AIDS… This is truly a global crisis and because the United States can render timely assistance, I believe we must.”

But Pence hasn’t always been so supportive in helping people with AIDS, or preventing others from contracting the disease.

As Indiana’s governor, he fought hard to defund Planned Parenthood, and one of the counties that had to shut down its facility later because of slashed funding suffered an HIV outbreak because its only HIV testing facility was Planned Parenthood. (After Trump and Pence were elected, Planned Parenthood received thousands of donations in Pence’s name.)

Pence is still seen as the mature conservative in the White House, and he hasn’t been tainted by the administration’s problems that include a war against the intelligence community, “fake news” talking points, or the travel ban disaster. Though it has been speculated that he was aware of Trump aides’ ties to Russia.

Now that Pence is friends with Bono, it likely will spark worry that Pence’s brand of far-right politics will continue to be normalized in the current culture. Which, if you’re pro-LGTBQ and pro-choice, is a frightening prospect.