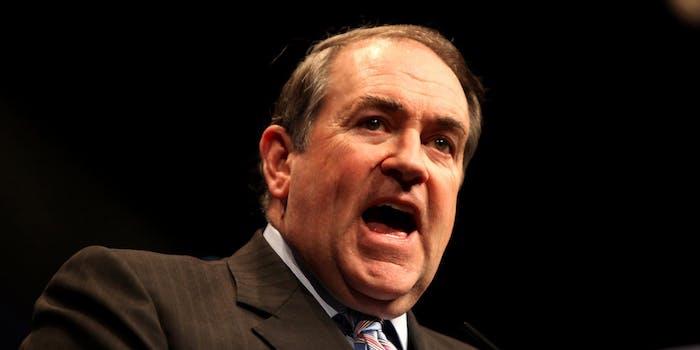 President Donald Trump continues to pursue the storyline that Central American gang MS-13 is trying to invade the U.S. and that Democrats want to help them by being lax on the border. Even with much of the country enraged by the administration’s policy of separating families that cross the border from Mexico into the U.S., that hasn’t stopped Trump and his surrogates from blaming others for this country’s immigration issues.

It’s clearly an attempt to tie Rep. Nancy Pelosi (D-Calif.) to Hispanic gang members, and much of the internet was disgusted by the racism of Huckabee’s proclamation.

All the subtlety of a Klan hood. https://t.co/cHmzDConMG

an American tradition like no other.
scary poc are always coming for you. https://t.co/gFExLkfKIb

Mike Huckabee introduces what’s left of the soul of the Republican Party. https://t.co/c8DctCy27Q

Mike Huckabee, a Christian minister who believes in the power of love and forgiveness, would never exploit racism and tensions over immigration for political purposes. https://t.co/qRlBFZVaQ9

While Huckabee’s daughter, Sarah Huckabee Sanders, has been under immense pressure since she began her role as Trump’s press secretary, Mike Huckabee has become a full-throated supporter of the president.

He’s made a transphobic joke about Sen. Chuck Schumer, joked about North Koreans eating dogs, said he didn’t remember Trump’s “grab them by the pussy” Access Hollywood tape, and declared that Robert Mueller’s Russian investigation was actually in his butt.

And during one Cinco De Mayo, Huckabee tweeted a racist joke, writing, “For Cinco de Mayo I will drink an entire jar of hot salsa and watch old Speedy Gonzales cartoons and speak Spanish all day. Happy CdMayo!”

Earlier this week, it was reported that Huckabee praised Qatar on Twitter and on Fox News but didn’t reveal that he had been paid $50,000 to lobby for the country.