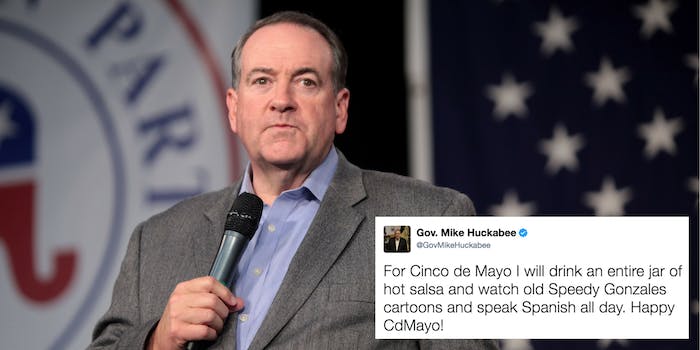 Looks like some of President Donald Trump‘s tactics are finally being embraced by establishment Republicans.

Up hours before the cock’s first crow, Huckabee wished the internet a festive Cinco de Mayo by tweeting out his off-putting plans to cinco de drinko down a jar of “hot” salsa, watch cartoons of the Mexican mouse Speedy Gonzales, and speak Spanish all the livelong day.

For Cinco de Mayo I will drink an entire jar of hot salsa and watch old Speedy Gonzales cartoons and speak Spanish all day. Happy CdMayo!

The tweet, for one, obviously points toward racist stereotypes of Mexicans and Mexican Americans, but is also completely confusing. Does he think drinking salsa and watching Speedy Gonzales are things people would actively choose to say to purposely be offensive?

These examples are so contrived, it’s almost like Huckabee’s day plans are a parody of what liberals would say to make fun of racists. Or perhaps Huckabee wasn’t “trying” to be racist at all, and simply wanted to make fun of “other people” who would do something like this on Cinco de Mayo, but definitely not him, the guy who tweeted it?

Regardless of Huckabee’s intent, this tweet is Certifiably Bad, and the internet didn’t shy away from roasting the former two-time presidential candidate with a brand of salsa so hot that even his non-Spanish-speaking tongue could handle it.

Cinco de Mayo will be renamed Cinco de MAYO because of all the MAYONNAISSE I add to my SALSA bc it's too SPICY sean SPICER in the news a lot https://t.co/tXESaGuWGK

when u front like u know the band's discography, but u only know 1 single & think they did Bitter Sweet Symphony https://t.co/kT4E27EHVH

How does being a cartoonishly racist pile of garbage make Cinco de Mayo any different from the rest of the year for you, though https://t.co/Lw1winva8k

Trump: I made the most insensitive Cinco de Mayo tweet.
Huckabee: Hold my cerveza. https://t.co/pAw1q3URd8

Other tweeters pointed to just how problematic Huckabee’s sentiment rang. He’s proposing that Americans such as himself celebrate the Mexican Army’s historic victory over the French by acting as parodies of Mexicans and guzzling fake Mexican food while watching an offensive cartoon depiction of Mexicans, and speaking Spanish, because supposedly that’s (a) a bad thing, and (b) the only language Mexicans and Mexican Americans know how to communicate in.

has Mike Huckabee ever spoken to a latinx person https://t.co/jVtpFRqLgD

Maybe you could try not being racist for just one day. https://t.co/udSVop6DWg

Several Twitter users strangely connected Huckabee’s bad Cinco de Mayo suggestion to his adult son David, who in 2008 was accused of taking part in the stoning and hanging death of a stray dog as a Boy Scout camp counselor in 1998. Huckabee denied the allegations at the time.

Is your son planning to kill a dog for Cinco de Mayo?https://t.co/0tGFaCQ5jQ

Ah, yes, the only thing that can stop you from thinking about your son murdering a dog. https://t.co/lNG91BCTTh

Congrats, Huckabee. You’ve seemed to out-offend your commander-in-chief’s taco bowl tweet from last year, with a jab that makes absolutely no sense but was clearly still meant to make a mockery of Cinco de Mayo.

At least the rest of us can take solace in the fact that your sad salsa shake will do quite the number on your digestive tract.