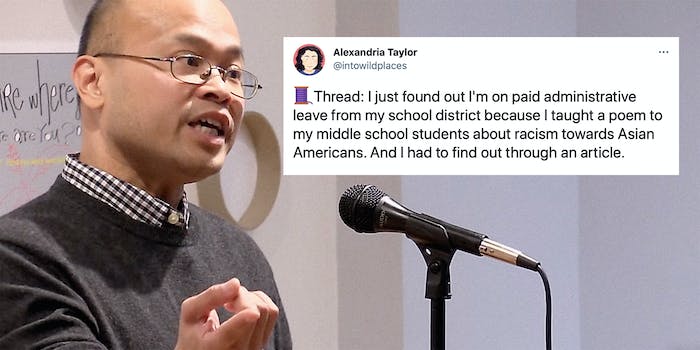 A parent complained about the assignment on Facebook five weeks later.

A middle school teacher who had students analyze an explicit poem about Asian American stereotyping in Hollywood says the school put her on leave after parents complained—and that she found out via an article online.

Alexandria Johnson wrote a Twitter thread on Wednesday explaining the situation, and the setup for her language arts class that prompted her to include the poem causing controversy.

“Our guiding question for this year is, ‘How do others experience the world differently than I do?’” she wrote.

To that end, when it came time to read poetry in her class, which Johnson says she teaches every year as part of a “March Madness bracket” exploring different genres of poetry, she chose “White Hollywood” by Joe Limer as an example of slam poetry.

But Johnson insists that she not only selected the poems carefully with her students’ maturity in mind but that the seventh-graders were prepared for the content ahead of time.

“With each poem, we’ve had a routine: learn background information on the author, preview the summary of the poem, and preview poetic devices we would see in the poem,” she wrote, noting that they spent even more time before diving into Limer’s poem, partly because it happened around the same time as the Atlanta spa shootings that drew accusations of violent anti-Asian racism.

Though Johnson says only one student opted out of the lesson at the time, and she was never contacted by any concerned guardians or faculty, a parent shared the assignment to a Facebook group five weeks after the fact, complaining about how “graphic” the poem was and noting that she sent an email to the principal.

The Post Millennial picked up the story and the similarly conservative Washington Examiner followed up with a note from the Issaquah School District’s Executive Director, Lesha Engels, that “the material has been removed from the teachers learning management system content” and Johnson had been placed on leave.

Reading about her class online, Johnson says, is how she learned she was on leave.

Folks on Twitter showing her support have expressed concern that the parent’s decision to take their objection to Facebook and then to the press indicate that their real concern may have to do with the teaching of anti-racism and that any complaints about sexual content may just be a cover.

For her part, Johnson just wishes that the parent would have reached out to her directly with any concerns so they could have engaged in a dialogue about the importance of the poem in discussing white supremacy in a way that would resonate with seventh-grade students.

“I know guardians have the best in mind for their students, so it makes me sad that this situation could have been prevented with personal communication rather than an escalation to the media,” she said.

But, she added, “I will not apologize for asking my students to think critically about [how others experience the world differently].”