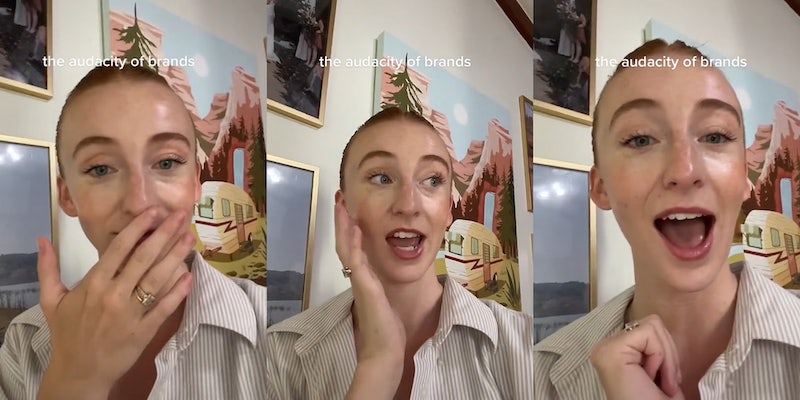 ‘Asking for content for free should never be OK’: Micro-influencer says brand asked her to style a look from her own wardrobe, for free

'If a brand is reaching out to me just for free content...that's taking advantage.'

TikToker Kayla Walden posted a now-viral clip that touches upon a phenomenon many micro-influencers (social media accounts with anywhere from 10,000 to 50,000 followers) experience: the expectation of free content creation from brands.

There are tons of articles and research conducted by business/marketing outlets that list the numerous benefits of enlisting the help of micro-influencers to build brands. Influencer marketing software company Izea writes: “Micro-influencers are easier to partner with and have higher conversion rates than larger influencers, and they also tend to be viewed as more authentic.”

However, Walden’s interaction with a style-centric smartphone application called Firenoon suggests that this particular brand doesn’t believe micro-influencers should be compensated for their time and effort.

@kayla__walden Has this happened to anyone else? #theaudacity #microinfluencer #brandcollabs ♬ original sound – Kayla Walden

In a now-viral TikTok, Walden shares that the brand reached out to her multiple times about what seemed to be a collaboration regarding styling an outfit to promote on the brand’s platform.

“I was like, ‘oh cool I’ll get to style one of your looks! Send over the info and let’s do it whatever,'” she says in the clip. “They send me the info, turns out I’m not styling one of their looks. I’m styling my own looks, with my own clothes, and then they get it for free.”

Walden says she questioned what she would be getting out of this so-called “collaboration.”

“I don’t mean to be rude, I love working with brands. I take gifted collabs all the time because I have no followers whatever but I’m just creating content with you in my own free time?” she says. “I work a full-time job, I don’t have time for that.”

The TikToker says she replied to the brand apologizing and said she was under the impression this was gifted or paid and politely declined. But the brand did not respond in kind.

“And then – y’all I can’t make this up – they respond with, ‘sorry, it’s not interesting enough for us to pay or gift things to people with under 10k views per video,'” she says. “I’m done, I’m ready to quit. One comment and I’ll expose the brand.”

Ironically enough, Walden received well over 10,000 views on the video where she discussed her poor experience with the brand. As of this publishing, nearly 2,000 people have commented on her clip and it has received over 1.4 million views.

Many TikTokers asked Walden to expose the brand and in a follow-up video, she admitted to feeling “bad” about dishing the dirt on the company. At the same time, she thought that it would be a good idea to alert other folks as to the business’ practices so they don’t feel pressured into essentially working for free or “exposure” on its page/app.

@kayla__walden Replying to @thesandraduran thank you to everyone for all the love❤️ the right brands are out there and will pay upu fairly! #theaudacity #microinfluencer #brandcollabs ♬ original sound – Kayla Walden

In the follow-up clip titled “the audacity of brands pt 2,” Walden explains that she receives a lot of side income, in addition to her full-time job, through UGC creation, which involves her creating content/videos and getting paid for said content.

What irked her is that the brand in question allegedly asked her to provide a function that she normally gets paid for, for free. Walden also added that “not having enough followers” is a tired excuse from brands to not want to pay her, and she said that “community engagement” online, especially sustained engagement, is much more valuable. There are several outlets and social media analytics that seem to support Walden’s claim: having involved followers who care about your brand, rather than thousands or hundreds of thousands of accounts that could care less about what you’re doing will ultimately translate to more sales. Basically: quality over quantity.

“Asking for content for free should never be OK,” Walden said in the clip before ultimately saying that she will say which brand it is because she’s never heard of them prior to them reaching out. The brand is Firenoon, which describes itself as “a social, playful & personalized fashion app that finds the articles you like.”

She then says in the updated clip what was particularly “irritating” was how “nice” she was to the brand in her rejection, and for them to downplay her social media presence, when they were the ones originally reaching out to her, rubbed her the wrong way.

She concluded the video by saying marketing is already headed in the direction of relying on content creators in order to promote products and that “no one is looking at traditional” campaigns any longer. Walden argues that because the industry has been re-defined in this way, individuals need to be compensated accordingly as a result.

“So let’s treat us fairly, please, and let’s stop taking crap from brands,” she says.

Walden says in a follow-up video that Firenoon is “threatening to sue” her. Many TikTok users remarked that it was “unprofessional” of the brand to respond to Walden’s request the way that they did. Others were happy she exposed them so they could steer clear of the app as well.

“Girl expose them. Imagine how many other girls fall for this thinking it’s a collab,” one user wrote.

“Funny since you got 10k+ on this,” another pointed out.

“HUH LIKE WHAT?! What’s wrong with them? They want you to put work and time in content they can use without compensating you … THE AUDACITY,” another viewer said.

“why are u apologizing to them. the audacity they have,” another wrote.

Others pointed out the brand’s double standard in requiring Walden to have a certain follower count when their own isn’t that high.

“I find it interesting that they said how you don’t have 10k followers…but on tiktok they only have 2k followers,” one user stated.

@kayla__walden Replying to @purplejayne well I could be sued. Can somebody help me? #theaudacity #collaboration #brands ♬ original sound – Kayla Walden

Firenoon responded to the Daily Dot’s request for comment in an email exchange, clarifying the nature of its proposal to Walden. In the email, the brand’s spokesperson explained the offer was a barter exchange, a common concept among brands and micro-influencers. They claimed they asked for one TikTok from Walden, who had on average 2,000 views per video.

“On our side, we offer an influencer post on Firenoon knowing that we have 30,000 active users. She’s not the only one spending time to prepare a post, we do exactly the same thing for her on our app and Instagram,” the spokesperson wrote in the email to the Daily Dot.

“It’s a win/win solution that allows us and influencers to gain visibility. We already had a few operations with influencers who were happy to do this kind of barter trade. It’s a free open proposal to which Kayla can obviously respond “no, I’m not interested” if that’s the case,” the email continued.

Firenoon’s spokesperson explains that they are a new app which is looking to grow.

“This outpouring of hate is very unfair, especially to hear that we wanted to take advantage of anyone as it has never been the case nor our intention. I don’t think people can actually judge without knowing all the details…You should also know that we have never been disrespectful to our influencers or anyone whatsoever,” they wrote.

The Daily Dot has reached out to Walden via TikTok comment for this story.