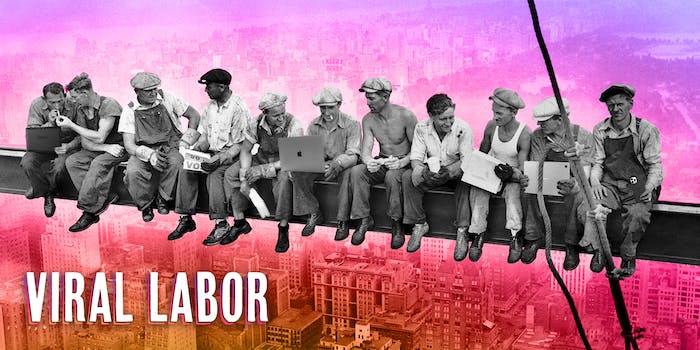 Influencers are trying to tame the digital creator economy

Influencer marketing is the 'wild West'—but unions could change that.

Sponsored posts may be something you scroll past on Instagram without a blink. We’ve grown desensitized to beauty influencers repeatedly promoting Flat Tummy Tea or SugarBearHair vitamins and TikTok megastar Charli D’amelio’s sharp edits of her eating Takis on our For You pages. Beyond digital creators with hundreds of millions of followers, however, lies a growing workforce of smaller influencers who make up an increasingly valuable marketing industry.

Many creators are now pushing for fair contracts, transparency, and timely pay as workers in the largely ignored industry begin to organize. Though in their early stages, multiple groups have emerged calling for better conditions, albeit in different ways. Social media accounts like @influencerpaygap have boosted transparency, while the American Influencer Council lobbies for changes in federal regulation to support influencers. In the U.K., the Creator Union envisions a strong collective to boost inclusivity and end exploitative practices.

From brands requesting an excessive amount of work for only a few T-shirts in return to marketing agencies failing to follow through on payments, the lack of regulation and transparency of brands is leading influencers to take action.

To gain power in the frontier of influencer marketing, digital creators have to learn how to organize. Kat Molesworth and Nicole Ocran spent the last year doing just that. The pair formed the Creator Union U.K., a digital creator trade union pushing for equitable contracts, inclusion, and transparency in the influencer industry in 2020 after uniting on Twitter while discussing fair pay for influencer’s image posts. Though, for them, organizing a union from scratch has been a whole new skill set.

“The biggest challenge has been, I think, learning how unions work and learning about the legislation around them,” Molesworth told the Daily Dot. “Just the learning curve, because we don’t have a union background, the learning curve of creating a union, and how that needs to behave in the U.K.”

Now, Ocran is preparing to present evidence to Parliament for the influencer culture inquiry, an examination of the impact of the expanding influencer marketing industry conducted by the Digital, Culture, Media, and Sport Committee, in September, a step toward being the first legally recognized influencer union in the world.

One TikTok macro-influencer, who has 2.5 million followers on the platform and shared an offer anonymously on @influencerpaygap, an Instagram account pushing for pay transparency, received $15,000 for a single brand deal. However, they noted that many brands will try to get them to lower their rates by stating that they can pay other creators “10x less.”

As the influencer marketing workforce grows, digital creators have greater opportunities for collective action to improve mistreatment they may face as freelance workers from brands, which is evident from the founding of both the Creator Union U.K. and the American Influencer Council last year. Additionally, in February, the Screen Actors Guild – American Federation of Television and Radio Artists announced the introduction of an influencer agreement.

Influencers are taking small steps into formal labor organizing, but they are simultaneously building collective power through other, less traditional, more digital means.

Transparency is one avenue of gaining leverage in the industry, and digital creators have been utilizing social media and apps to share pay rates, in hopes of promoting fair and equal contracts, especially for Black and brown creators. Instagram account @influencerpaygap launched in June 2020 and shared anonymous direct messages from creators who shared their rates for brand deals.  One creator shared an email from a brand that requested 10 Instagram reels in exchange for $120. Another influencer with 220,000 followers was offered $3,000 for 10 Instagram posts and five stories. Others in the comments urged them not to take it or to negotiate for higher pay. While the account has almost 60,000 followers, it has been inactive since March.

Influencers can also leave reviews of brands they’ve worked with through a new app that streamlines anonymous compensation data called Fuck You Pay Me. The app is currently being tested, but according to the New York Times, 1,500 creators have already left over 2,000 reviews.

While the impact of these efforts on brands is yet to be seen, transparency among influencer pay rates has led many creators themselves to insist upon higher rates. “After reading through this account, I’ve realized I’ve been underselling myself completely…,” a 20-year-old lifestyle and wellness TikTok creator said anonymously in a direct message to @influencerpaygap. “Especially because I have a consistent genuine audience.”

Because influencer unions are in their early stages, though, even creators themselves are a bit wary of them. Silberman said she’s hesitant to join SAG-AFTRA due to a lack of precedent.

“Because it’s still so new, I think a lot of people (myself included) are waiting to hear more about how it would affect our work,” Silberman said. “I’d feel more comfortable joining once I’ve heard from other creators who had positive experiences.”

Most brands that utilize influencer marketing have yet to speak out on the movement, but some companies have opted for an “anti-influencer” approach. As Glossy reported, brands including Thirteen Lune, Humanrace, and Ceylon Skincare secured influencers and celebrities to promote their products online—for no compensation. While brands argue that this bolsters more authentic promotion and combats “influencer fatigue,” a phenomenon in which consumers are desensitized to, or annoyed by, repetitive influencer sponcon, it also normalizes unpaid work in the industry.

As a result of such practices, Silberman said she recognizes the importance of unionizing and the benefits it could provide across the board.

“It would be nice to eventually have some form of accountability so that everyone is treated fairly, and protection is in place for all creators,” Silberman said. “I also think it would help lend credibility to a field that many people still don’t take seriously, despite the fact that it’s projected to be a $24 billion industry over the next few years.”

While management can offer influencers help in negotiating contracts, a union provides more negotiating power for benefits across the board, including equitable pay, healthcare, and legal services.

“If you lose the scarcity mentality that we have as freelancers because you’ve got the reassurance of a union behind you and some of these things are covered off, then you have the ability to do your best work,” Molesworth said.

The limits of lobbying

While no influencer unions aside from SAG-AFTRA’s agreement exist in the U.S., the American Influencer Council launched in 2020 as an invite-only nonprofit organization. The group operates as an educational business resource for its members and lobbying agent for influencer interests rather than organizing a labor movement.

The council’s prime legal goals are to change the Federal Trade Commission guidelines to be more inclusive of influencers and digital creators. The group is pushing the FTC to standardize sponsorship disclosure requirements across social media platforms so influencers can properly communicate which posts are sponsored. According to the vice president of the council’s board, Aliza Licht, creators are held responsible for failure to accurately disclose sponsorships, but the varying requirements at different platforms make it much more complicated. The council also encourages the FTC to establish a three-year review process, instead of the current 10-year cycle, in order to keep it’s guidelines up-to-date with rapidly changing technology.

The Daily Dot reached out to the FTC for comment, and Juliana Gruenwald of the Office of Public Affairs said that the commission asked for public comment on whether or not to revise its sponsorship disclosure requirements last year, as part of the agency’s review of its rules and guidelines conducted every 10 years. The FTC last revised its endorsement guidelines in 2009.

“In simple terms, the FTC needs to move at the speed of social media,” Licht told the Daily Dot. “Their old guidelines do not even mention the word influencers or even recognize new major players like TikTok. For them to truly be effective, they need to give creators a seat at the table.”

The council’s membership is also exclusive. Influencers either need to be invited to join or fill out an application on the council’s website. According to Willow Miller of the council’s press office, the group operates this way due to its required time commitment. She told the Daily Dot that its members take action through committees and task forces.

However, organizers like Molesworth and Ocran are opting for a more collective approach. Molesworth argues that an inclusive, wide-reaching union for all influencers and digital creators has the power to improve the industry for everyone.

“The union movement has a huge amount of potential for collaboration and camaraderie,” Molesworth said. “We’ve had people from really big, important unions in the U.K. reach out to us privately and say that they’re there to support us and give us any advice we need, which is really brilliant. We’re really grateful for that community.”

As Ocran and Molesworth work to get the union legally recognized by the U.K. government, they hear from many influencers who experience exploitative or unfair contracts firsthand, similar to those shared on @influencerpaygap. Despite the challenges they’ve faced in founding the union, Molesworth said it’s her anger at how people are being treated in the industry that keeps her pushing through these early stages.

“Anytime that I’m slagging or writing a submission to Parliament that is boring me to tears,” Molesworth said, “the reason I’m doing it is because I want to see people’s careers improve and I want to see poor behavior leave the industry and for the standard of professionalism to be present on both sides.”