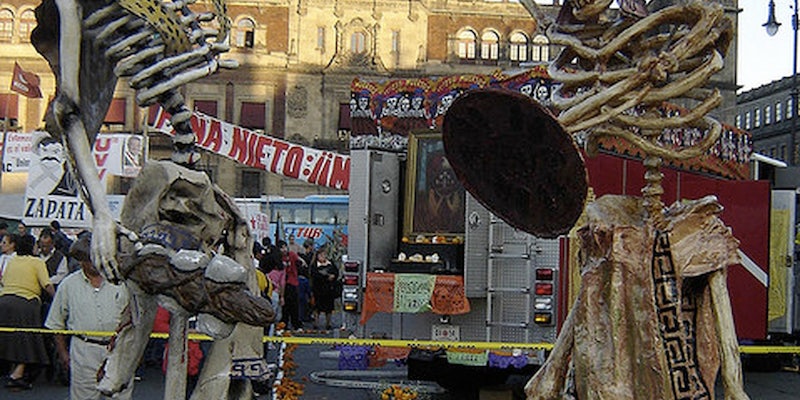 It looks like Mexican drug cartels are recruiting hackers to track down people who use social networks to release information about them.

One of the main questions following this month’s brutal murders of people who were accused of posting information about Mexico’s hyperviolent drug cartels has been how were the cartels able to determine the identities of people who thought they were making anonymous posts.

A barely-noticed article from this summer may shed light on the cartels’ methods: in addition to recruiting armed mercenaries, corrupt politicians and crooked cops, cartels like Los Zetas appear to also be actively recruiting hackers, sometimes forcibly.

While hackers have primarily been recruited to carry out more traditional crimes, such as credit card cloning and cyber money laundering, it is possible they may have also been brought into the cartels to help identify people who share information about drug running activity on social networks.

Posts on Mexican crime blogs and on social networks like Twitter have become vital in tracking cartel movements as journalists — fearing they will be executed — have shied away from covering the cartels.

Blog del Narco, one of the leading voices in cartel coverage, claims it was started because because “the media and government in Mexico try to pretend that nothing is happening, because the media is intimidated and the government has apparently been bought.” Other residents of the areas hit hardest by the violence turn to Twitter, following updates on hash tags like #mexicorojo.

Posts on the #mexicorojo hash tag range from retweeting of mainstream news articles to expressions of outrage to hyper-specific details about gang activities and movement throughout Mexico. The posts can also be grim:

“At least 50 executed at the end of the week,” Luis Cárdenas López posted on Monday, updating the ever-mounting death toll. More than 40,000 people have been killed or gone missing in the past decade.

But there are other, more sophisticated ways of keeping track of the cartels. The Mexican daily, El Universal, has created a crowd-sourced map showing the locations of gang-related crime in Mexico City. Others are reportedly working on an app that will allow users to report corruption when they see it from their cell phone, including when a police officer extorts money to not write a traffic ticket.

On Saturday, a woman was found decapitated in Nuevo Laredo, near the Texas border, with a note saying she had been killed for messages she posted on social networks aimed at criticizing the hyper-violent drug cartels. That came less than two weeks after the bodies of a man and a woman were found strung from a pedestrian bridge in Nuevo Laredo with similar notes.

But even before those attacks, it was clear the cartels have been paying attention to social networks. Some have used Facebook to identify kidnapping victims, while others have trawled unsecure pages for personal information in an effort to convince parents their children have been kidnapped.