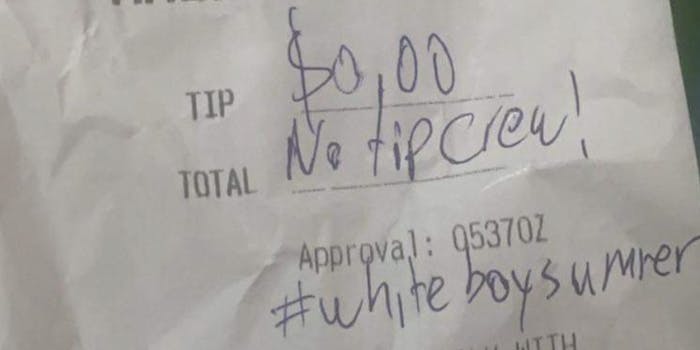 The server, who goes by 'Maman' on Twitter, speaks out.

A server in Philadelphia has said a pair of white men in suits left them a $0 tip and signed it off with “#whiteboysummer” during their shift on Saturday evening.

The server, who goes by “Maman” on Twitter, did not want their name published fearing reprisal, and told the Daily Dot that the two men were rather polite during the time that they waited on them.

They did not disclose the name of the restaurant due to privacy reasons but said the incident took place at a chain restaurant “where one could order ice cream and bring their kids.”

The customers, who appeared to be white males, also wrote “No tip crew!” in the tip section on the $97.55 bill.

The server said the customers were polite and even made sure to not leave a mess at the end of the meal.

“They even went so far as to stack their plates for me and told me to have a good day, so it was weird that they didn’t tip,” they told the Daily Dot.

The tweet has been viewed tens of thousands of times since it was posted on Sunday evening.

The server said the men were overdressed and behaved oddly.

“One of them had some kind of weird-looking reflective sunglasses on,” the server said.

They ordered large glasses of milk, chicken tenders, and lots of ice cream, enough for the bill to climb up to almost $100.

“They kept making some kind of inside joke about ordering a burger with onions, swiss cheese, and mushrooms but they didn’t actually order it,” the server said, adding that they didn’t think the men were under influence but had something “off” about them.

The server, who is white, said some of their co-workers who are Hispanic were uncomfortable. The server also said while this kind of behavior is not entirely unusual, it’s usually teenagers who act in this manner—these were adult men.

Meanwhile, some on Twitter commented on the fact that it’s a customer copy, trying to raise doubts about the authenticity of the incident. But soon people began responding that often they don’t notice whether they’re signing the customer copy of merchant’s copy of a bill.

‘Tbf I don’t know a single person who pays attention to who’s (sic) copy is who’s (sic),” wrote one user.

“At the end of the day I’m not very surprised people don’t think it’s real, but I get these kinds of notes pretty often,” the server said.