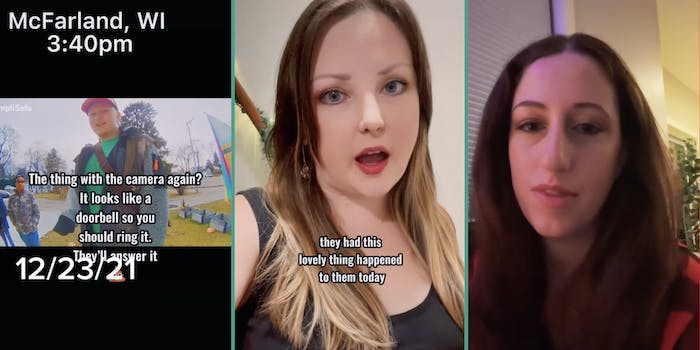 ‘Would you q****rs get the f*ck out of my neighborhood?’: Men harass lesbian couple and daughter in viral TikTok

'Was the entire goal to make a child cry?'

Three men harassed a lesbian couple and their daughter in McFarland, Wisconson for having a pride flag on their home. The couple’s friend, TikToker @mermaidmomarielle, shared footage of the harassers from a Ring doorbell in a viral TikTok last week.

After the three ring the doorbell, the couple’s 5-year-old daughter opens the door, with one of her mothers right behind it and out-of-view from the harassers.

“See, I’m not from here, but would you queers please get the fuck out of my neighborhood?” one of the harassers, wearing a hat that says “Show me your titties,” says with a laugh.

The three then run away as the girl’s mother reports them to the police.

“Was the entire goal to make a child cry? What the actual fuck,” the TikToker, Arielle Petri, says in-between footage of the harassment.

“They know that there’s a camera but feel so invincible in their homophobic hate that they think nothing could possibly happen to them,” Petri says.

The TikToker then calls on viewers to help identify the harassers in the video.

“My friends do not deserve to feel unsafe in their neighborhood because they’re fucking gay,” they say. “Get over it.”

In the video of the incident, the harassers are frustrated that they came across “another” doorbell with a camera.

According to a comment on the McFarland Police Department Facebook page, the three harassers visited another house with a pride flag earlier that day. Petri says in a follow-up video that she’s reached out to the family of the second house, but has yet to hear back.

All three men have been arrested. According to a press release from the McFarland Police Department, two of the harassers, Malik Yrios and Bradley Behling, were charged with one count of a disorderly conduct hate crime, while the third who spoke directly to the child, Cory Mellum, was charged with two counts.

Petri’s TikTok received almost 900,000 views, and in a follow-up video, they share the overwhelming support the family has received from their neighbors. Petri says they’ve been given flowers and ice cream, and many of their neighbors have put up pride flags in solidarity.

One of the mothers, user @hiitsnursechristine, made her own follow-up video addressing the incident and the support they’ve received in response. Petri then boosted the video by sharing it to her page as well.

“As tough as it was, it was really awesome to go through and read all of those, and know that we’re loved and supported,” the mother said.

Christine also said her daughter is still shaken up from the situation and has trouble sleeping at night. However, Petri has created an Amazon wishlist for their daughter, and Christine says their neighbors have been generous with gifts for her.

In a statement to the Daily Dot, Petri offered further context: “I was the family’s child care provider until Brielle started 4K. When I saw Christine’s facebook post of the incident on 12/23/21, I immediately texted her. After a whole 30 seconds of no response, I just couldn’t wait anymore and called Christine lol. We chatted and she told me how upset they all were. I volunteered my platform to help identify the men. Within minutes of posting, the messages identifying the men started flooding in. We provided the names to PD and they were arrested. Brielle’s natural talent in life is being extra compassionate but this also means that she is a rather sensitive person. I really wanted to show her how much support that she has from the community so I started an Amazon wish list for Brielle. We have been overwhelmed by the outpour of love and I am so excited to surprise her with over 100 gifts!”

Christine also suggested that TikTok users make their own videos showing support and solidarity for the family that she can show her daughter.

“She did think it was really cool when I told her that the whole internet thinks that the people who came and were mean to her, you know, thinks that they’re bad guys and that she’s awesome,” she said about her daughter.

The support the family received was echoed in the TikTok comments.

“I live about a mile away from them, my mom, my sister and my grandparents all live in town too. Your friends are more than welcome here,” one user said.

“Dude didn’t seem so brave, he was running off before he finished his sentence. I’m so sorry this happened. I hope it never happens again,” another user said.