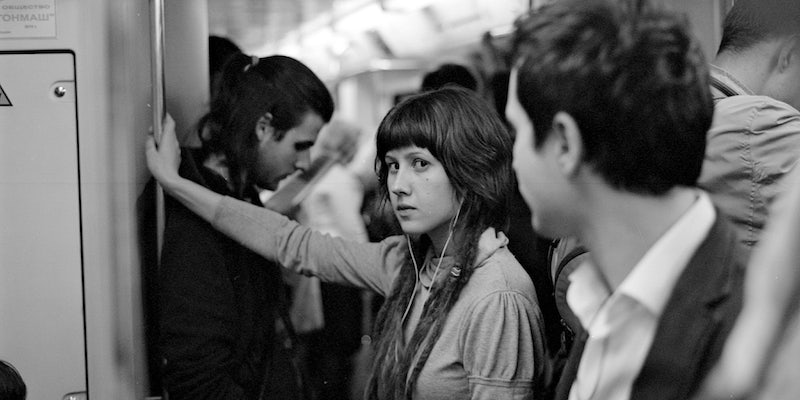 Men, here’s what you can do to fight rape culture

Over the past week, women have shared their experiences of sexual harassment and assault on social media with #MeToo. Men, in turn, have responded by “owning” how they have sexually harassed women with #IveDoneThat and #HowIWillChange. Of course, it’s not enough for men to simply promise to change their ways and rack up likes on Twitter. If men really want to put an end to sexual harassment, then they need to put their words into action.

Numerous women—including Reductress’ Nicole Silverberg—turned to social media this week to lay out a list for men to follow to help end rape culture, including everything from “don’t talk over women” to “don’t touch women you don’t know.” And these lists are spot on. In every setting, men can take steps to make women feel safer.

From the workplace to the bedroom, here’s what men can do to fight back against sexual harassment and assualt—as well as prevent themselves from doing what they might not (want to) see as harassment.

It’s all body language. If a woman looks like she doesn’t want to talk to you, then don’t. If she’s busy walking, texting, reading, working, drawing, making balloon animals, basically doing anything alone by herself, it’s extremely uncomfortable to have a man come up and suddenly start flirting. It’s not your place to approach her, and more often than not, you’ll scare her off if you suddenly stop her in the middle of the street. Ask yourself: Why do I need to flirt with a woman just because I find her attractive?

On that note, and this should be obvious, don’t walk past a woman on the street and comment on her appearance or her smile or lack thereof. She is just trying to get somewhere. Her existence is not to please you.

And for the love of god, do not mumble a compliment in her ear. At best, it’s intimidating; at worst, it’s predatory because you’ve invaded her personal space and your mouth is in her face.

Also, don’t even think about approaching a woman walking home alone late at night. In fact, give her plenty of space. Every woman’s heart races when a man bridges the gap between himself and her when it’s dark—or even when it’s not. Remember, in her eyes, the only difference between an innocent man and a predator is your distance to her while walking home.

Oh, and if you see something, say something. Stand up for someone being harassed, separate a groper from his victim, and purposefully keep a predator away from young women. Don’t just be a bystander, get involved. Sadly, men are more likely to take sexual harassment seriously when men step up and call them out.

The workplace is one area where misogyny runs rampant. That’s in part because many professional fields are still male-dominated. Men are boosted to leadership positions in office jobs while women are held back from promotions and raises. Combine that with racism and transmisogyny as well as economic disadvantages from the wage gap, and most women in the workforce become easy targets of abuse.

The first step toward ending this culture of harassment and abuse is to treat women with respect and offer them a safe work environment. Let women speak up, and don’t interrupt them when they’re talking during meetings. Give your female colleagues the opportunity to voice their opinions freely, and take their ideas seriously. Don’t steal women’s ideas, either, and then take the credit for it. Offer resources, support, or assistance if needed. Show you care about equality.

We will never end the harassment and abuse of women, especially in the workplace, unless we speak out and stand together. #MeToo

From Trump and Weinstein to your workplace, on the train and down the pub. It's time more men stood up and said #NoMore to #MeToo.

Trust your gut, too. Silverberg points out that men should talk to other men who are “kind of a creep.” And if creepy behavior happens in your workplace, do something. Reach out to a victim and offer support, or contact HR if need be. If your male coworker is harassing women in front of others, call out the behavior. And if a subordinate is behaving inappropriately, reach out to HR and talk to the employee directly. Don’t let sexual harassment go unchecked because it’s just “part of the culture.” Change the culture.

Bars, clubs, and pubs are great places to meet single women and mingle. But just like walking out on the street, going out and having a beer isn’t an open pass to behave recklessly.

Silverberg encourages men to “read a fucking room,” which is particularly the case when you’re at a bar. Are people hanging out with their friends or mingling between groups? Are you at a club where people are getting close and making out, or is it more laid back with a friendly, non-romantic environment? Check the room’s temperature and behave accordingly. Don’t hit on women for the sake of it—you’ll just make them uncomfortable. If you’re thinking, “C’mon, what’s the harm in playing my chances,” then ask yourself why you think it’s OK to make women feel uncomfortable.

#MeToo – What woman hasn't? From ass grabs at a bar to threatening conversations… Wow, all women could really use the 280 characters today

In Girl Sex 101, Allison Moon says creepiness comes from perpetrators hanging onto a conclusion: They assume that talking to a woman, buying her drinks, or hanging out with her will lead to sex, and they’ll stop at nothing to make that goal into a reality.

So don’t walk into a room with the expectation that you’ll get laid. Don’t expect a “hello” or a “nice to meet you” will automatically lead to sex, either. And when a girl says no, don’t respond by touching her or negging her. And if she’s clearly cutting the conversation short, that means she doesn’t want to talk to you. So just stop.

Pick-up artistry is notoriously misogynistic, and some of the biggest artists around make money off advice that encourages sexual assault. If you really care about the women around you, then don’t talk to them expecting free sex after a conversation finishes, and respect their boundaries if they don’t want you around at all.

The bedroom is the trickiest area because it’s the most private one and you should be there together with some level of trust. In other words, get consent and keep checking in.

From the start, communicate with whoever you’re sleeping with. Know if your partner has any areas they do not like to be touched or positions they don’t want to engage in, and respect those limits. Don’t try to push women out of their boundaries, either. While some women’s comfort zones are flexible, it’s completely inappropriate to use your hands to figure that out. Talk to your partner and ask for permission before touching her in a way that might be upsetting.

Silverberg points out that there are many prerequisites to what constitutes “enthusiastic consent,” like whether a woman has explicitly agreed to have sex, or if she’s too drunk or high to properly understand what’s going on. It’s predatory to use alcohol and drugs to “loosen up” women, purposefully raising their inhibitions to take advantage of them. Bill Cosby has been accused of assaulting dozens of women by using this tactic.

Obviously, there’s a difference between a drink or two at the club and a man feeding women drinks for a hookup, but that line becomes blurry quickly. If you see a friend purposefully getting a woman high to take advantage of her, don’t simply give him a pass. Tell them to stop in no uncertain terms. And if your partner sounds like she’s begrudgingly agreeing to sex, stop and talk to her. She might just be nervous, or she might not want to have sex with you. But either way, you should communicate and figure out what’s going on instead of proceeding. Do not just proceed. Do not.

We must keep our voices heard and speak out in solidarity. More and more brave women all over the world are continuing to share their #metoo personal stories. We commend their bravery. Her Future Coalition is dedicated to women’s rights on a universal level. . . . Explore our website to learn about our activism and long lasting impact. . . .

Fighting sexual harassment and assault starts with men changing their behavior, and that means it’s important for men to do some self-reflection. No matter how “good” a guy you are, I am certain you could be a better partner, a better ally, a better person. Help end the problem by doing your part.