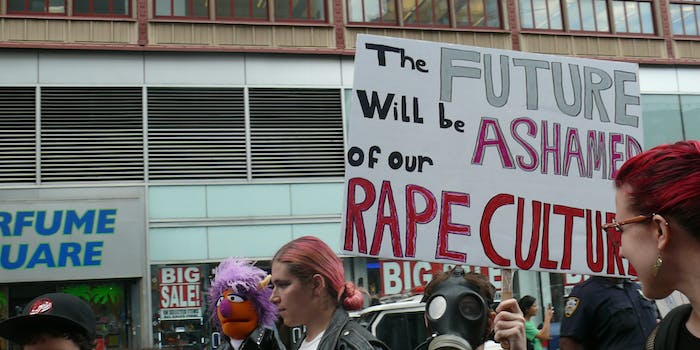 Admitting to sexual harassment on Twitter isn't necessarily a prerequisite.

Earlier this week, women turned to Facebook and Twitter with the hashtag #MeToo, shedding light on their experiences with sexual harassment and assault. The viral movement has since been criticized, with many arguing the hashtag ignores women of color’s work to elevate survivors’ stories.

Now, amid all that, another problematic hashtag, #HowIWillChange, has emerged from Twitter. And this one is for men.

Writer Benjamin Law came up with the idea after he urged men to step up to the plate and say how they will change to support women who have been “abused, assaulted, and harassed” by other men. He gave multiple suggestions in a Twitter thread, each listed under the hashtag #HowIWillChange. His promises include donating to local women’s shelters, calling out misogyny, reporting sexual assaults, and supporting women who have experienced sexual assault.

“#HowIWillChange: Acknowledge that if all women I know has been sexually harassed, abused or assaulted, then I know perpetrators,” Law wrote in a tweet. “Or am one.”

Law’s take appears genuine, and it’s good to see men calling themselves out and promising to improve their behavior. After all, society won’t change until men begin holding themselves accountable for their own role in women’s sexual harassment and assault. If #MeToo has suddenly turned a dozen men into thoughtful, active allies, then the hashtag has done more than any woman has sadly come to expect.

Guys, it's our turn.

After yesterday's endless #MeToo stories of women being abused, assaulted and harassed, today we say #HowIWillChange.

#HowIWillChange: Acknowledge that if all women I know has been sexually harassed, abused or assaulted, then I know perpetrators. Or am one.

#HowIWillChange: Recognise anything we offer to do using this hashtag is already done by women every day and they cop endless abuse for it.

And on Law’s #HowIWillChange hashtag, several men quickly joined in. Some pledged to support the women around them when they talk about harassment. Others promised not to condone and enable misogynistic abuse. And some even admitted their role in sexual harassment, promising Twitter that they will change their behavior in the future.

#HowIWillChange? Never accept the diversion tactics of abusers. Never enable, even passively, the behaviors that lead to this.

#HowIWillChange means acknowledging MY OWN capacity for harmful behaviour, and taking responsibility for unlearning that toxicity

#howiwillchange by fighting the ugly habits I have gathered & instead listening more, talking less.Believing without asking for an open vein https://t.co/Yj1oLgiijA

In a similar hashtag, #IveDoneThat, men also admitted to sexually harassing women. Some used the hashtag to call out other men, encouraging them to treat women with respect. Others treated the hashtag as an opportunity to confess their misogynistic behavior and promise not to act abusively in the future.

You can't be a woke ass dude feminist until you take responsibility that you're guilty of shit too. #IveDoneThat pic.twitter.com/aGZU8Yl4uo

#IveDoneThat I've drunkenly hit on women working in bars before. Women who are trying to do their job & didn't deserve a drunken idiot… https://t.co/NnRFQ0BDsF

Women BEEN #MeToo'ing for too long. It's time for more men to admit #IveDoneThat so we can take responsibility & truly change our behavior. pic.twitter.com/bTf1L6ItQm

But even though both hashtags shed light into men’s relationship with women’s bodies, there’s a difference between admitting wrongdoing to move forward and committing self-flagellation for its own sake. Many activists are concerned that men are promising to change, or admitting to sexually aggressive behavior, because people on social media will pat them on the back, otherwise known as performative wokeness. These men may not step up to the plate off Twitter, where private interactions in clubs, bedrooms, and workplaces really matter.

#HowIWillChange in a nutshell: "Well *I'm* not a bad guy but all the other guys are and it's my duty to stop them."

Great. All the stories are about harassment done in past tense. #IveDoneThat? More like #ImStillDoingThat

The Hill’s Taylor Lorenz captured the hashtags’ problems quite well, suggesting that admitting to sexual harassment may be “insurance” for men who fear future call-outs from their victims. That means men posting in hashtags like #IveDoneThat and #HowIWillChange aren’t necessarily showing up in good faith. If there’s no accountability, and if these men are apologizing for past behavior without gaining closure with their victims, then are they really promising to do better to the right audience?

Here’s the reality with consent: If Americans live in a rape culture, which we do, that means we have all been taught to accept, normalize, and bury sexually aggressive behavior by men. This means men have the potential to push boundaries, violate consent, and commit sexual harassment or assault unless they unlearn non-consensual sexual behavior. Just as Americans live in a misogynistic and racist society, tackling the nation’s problem with sexual harassment and assault starts with acknowledging this history and the roles men—even “good” men—take to perpetuate it.

But that doesn’t mean the answer is for men to turn to Twitter and explain how they’ve sexually harassed and assaulted women before. It just means those men have to promise to do better to the women in their lives, and to women in general, and then actually do better. Otherwise, who are these self-call-outs really for—women? Or for the guilt, conscience, and egos of the sexual aggressors themselves?