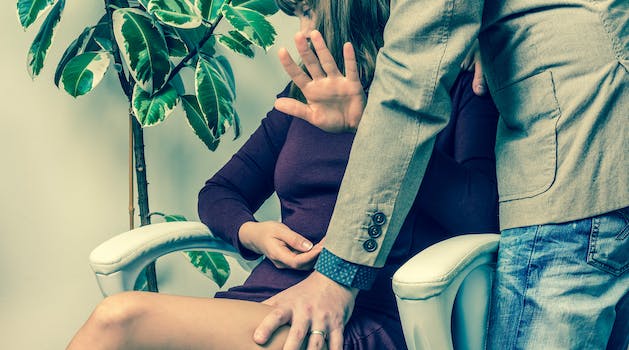 Sexual harassment, sexual assault, and rape allegations against Harvey Weinstein have dominated the headlines this week—and the responses to these accusations are getting equal attention.

Lindsay Lohan was rightly criticized for her defense of Weinstein, saying she “feels very bad for him” while ignoring what his victims have experienced. Donna Karan was pilloried when she suggested that women were “asking for it,” perhaps the most virulent justification that is trotted out by enablers whenever such allegations arise. Some men like Anthony Bourdain, George Clooney, and Colin Firth have unequivocally criticized Weinstein. And Terry Crews was courageous enough to come forward about his own assault.

But many have pointed out that there is a culture of men being silent when they see other men harassing and abusing women. And that culture has to end.

The focus on people’s reactions to abuse is not meant to overshadow the victims—these brave women who have come forward against an abuser of Goliath proportions—but it’s an important reminder that we all have a role to play in being better allies and creating an atmosphere that doesn’t tacitly condone sexual harassment and abuse. Especially in our workplaces, where there is often a reluctance or an awkwardness around reporting or even acknowledging inappropriate behavior.

We need to be good allies when we see and hear about sexual abuse. We need not to be complicit. Whether you’re a man or a woman, it’s time to act.

“Simply put, sexual harassment deteriorates what should be an atmosphere of positivity and mutual growth in the workplace and turns it instead into an oppressive atmosphere of attack, where co-workers become mere targets or objects of fantasy,” Andrew Jensen of Sozo Firm, which specializes in sexual harassment, tells the Daily Dot.

So what can you do to stop it? Well, being a good ally is a mix of support, encouragement, and respect. But the bottom line? Don’t ignore it.

The first step towards not being complicit in sexual harassment is understanding what it is. Too often behaviors are written off as harmless or even accidental, when in reality they are creating an inappropriate and hostile workplace. It’s not just overt actions like touching or come-ons that constitute harassment, it’s also sexist jokes, commenting on someone’s body, invading their personal space, wolf-whistles, pressuring someone to go on a date, telling sexually explicit stories at work, leering, and so much more.

Take a moment to educate yourself. And if you see this behavior or someone reports this behavior to you, don’t downplay it or be flippant. These are serious transgressions, not harmless fun.

If you hear something or see something and you’re tempted to ignore it, it’s crucial that you understand the significant consequences of that. “To not report observed sexual harassment in the workplace involving others is to essentially silently condone the behavior,” Jensen says. “Though reporting it may be awkward or may result in repercussions, reporting the harassment ultimately helps both the victim and the one doing the harassment. Left unreported, employees or managers doing the harassing can fall into a pattern of repeated behavior where such becomes tacitly accepted, and the overall atmosphere in that workplace degenerates.”

It doesn’t matter if you’re sure the person “didn’t mean anything by it”—that’s not an excuse.

Be prepared for aggressors to be dismissive

You may be tempted to speak to the person you see being inappropriate, but it’s far more important to talk to the victim and encourage them to report it to someone higher up. Aggressors rarely see their behavior as problematic, so unless they are subject to outside scrutiny, it won’t change.

“Bringing forward into public light the harassment taking place forces the one doing the harassment to wake up to the seriousness of his/her derogatory behavior while hopefully releasing the victim from the oppressive situation they had been experiencing up until that point in time,” Jensen says.

Calling out someone on behavior that isn’t OK can be helpful, but ultimately it needs to be taken to a higher-up.

If you see something, say something—to the victim

As I said, talking to the victim is key. Not only so you can show your support, but also because it’s the best way to get the situation brought to light.

“If you are aware that a friend at work is being sexually harassed, encourage him/her to go to their supervisor (or the next higher person in the chain of command) and report it; even if the friend is not completely certain that the behavior they are experiencing qualifies as sexual harassment, if they are uncomfortable with what is happening toward them, it is best to bring that concern and discomfort out publicly with the management at the business so other more neutral eyes can begin observing to help determine if something is truly amiss,” Jensen says.

Getting neutral eyes on it not only allows the victim to air their experience, it is also the first step toward finding a solution and getting them out of an uncomfortable situation.

Listen to the victim and don’t minimize their experience

The truth is, many victims will feel vulnerable and will try to downplay or minimize their experience—so it’s all the more important that you acknowledge the severity of the situation.

speak up and speak out. support other women and help prevent it from happening to others. #GirlPower #sexualharassment #sexualassault

You can’t force someone into taking action, but you can underline the gravity of their aggressor’s behavior and encourage them to talk about it in a safe space.

Don’t be afraid to speak the words

Don’t be wishy-washy. That’s how harassment is allowed to slide and victims’ experiences become marginalized. When you speak to the victim, be clear about what you saw and what you think that means.

“State what you saw and your concern that this is harassment,” Laura MacLeod, LMSW, HR expert and founder of the Inside Out Project, tells the Daily Dot. “This is necessary because what you saw may be taken out of context—the relationship is such that the words and actions are not seen by either party as harassment.”

Being clear with your language ensures that you and the victim both understand what you’re referring to and allows you to assess how they feel about what you’ve seen. Then you can use your judgment to go from there.

If you hear about something, be more cautious

Hearing about sexual harassment is more of a gray area. If a victim is telling you about it directly, then all of the above applies—lend a safe ear and encourage them to report it. If you hear about it through the grapevine, then you need to use more discretion.

“If you hear about someone being sexually harassed, you need to consider the source—who is saying this—credible or rumor/gossip?” MacLeod explains. “Even if you trust the source, this is shaky at best—hearsay with no way to verify. If you know the person who may be the victim of harassment, you may consider approaching him/her and sharing what you heard. However, you should know this person WELL—and you are probing because you are concerned.”

Bringing it back to the victim is always the right move. Ultimately, this is about them.

Coming forward about a sexual assault or sexual harassment takes guts. But creating a safe environment for victims to come forward shows harassers that this kind of behavior will not be tolerated. Silence only allows abuse and harassment to thrive—it gives aggressors impunity. So don’t be complicit. Let’s create an environment and society that doesn’t shield abusers with silence.