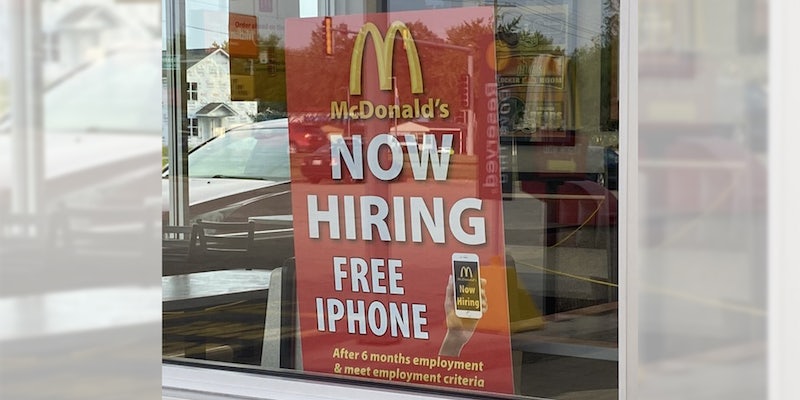 ‘Companies will do everything but pay you a living wage’: McDonald’s blasted for offering conditional ‘free iPhone’ to incentivize applicants

'We’re not buying it. We’re not falling for it.'

Sometimes the most simple tweets speak the loudest, and @EugeneGlukh’s tweet spoke volumes: “Companies will do everything but pay you a living wage.” The tweet was a quoted response, meant to blast McDonald’s for offering an apparent, conditional “free iPhone” to incentivize prospective applicants.

@brogawd_ made the original tweet, with the caption: “LMFAO G MCDONALDS IS STARVING.” It shows a sign in a McDonald’s window, saying applicants could collect a “free iPhone” after six months of employment.

We’ve reached out to McDonald’s to verify its authenticity. The tweet from Saturday has 213,000 likes as of Monday.

Of course, people got their concerns or funny reply tweets about the “free iPhone” off all the same.

However, “free iPhone” jokes aside the sign, and others like it speak to ongoing concerns as American companies face criticism for their post-pandemic wages.

However, in the same study, Ashenfelter discovered that McDonald’s will raise the pricing of products in correlation to the wage. In essence, “a minimum wage increase appears to be a redistribution of wealth from customers to low-wage workers.”

According to a study by the Congressional Budget Office, “raising the federal minimum wage to $15 an hour by 2025 would increase wages for at least 17 million people and put 1.4 million Americans out of work.”

In the face of planned strikes in major cities, McDonald’s said in a recent announcement that it would raise the minimum hourly wage at its corporate-owned restaurants, per the Independent: “The company announced on Thursday that hourly wages for employees at company-owned locations would rise to $11 to $17, and starting wages for shift managers will be raised to at least $15 to $20 per hour, based on restaurant location.”