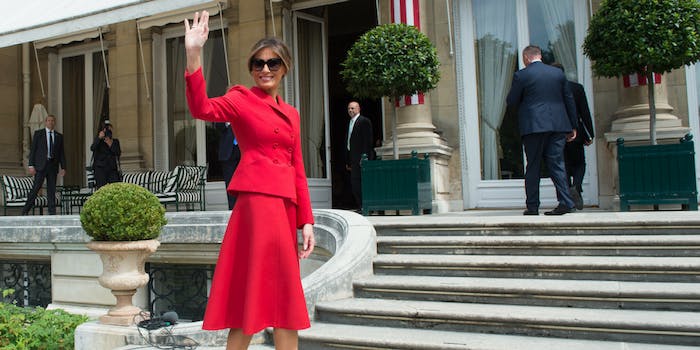 Melania might have her husband to thank for her international 'snub.'

In an act of obvious aggression against the Trump administration from the so-called tolerant left, Vanity Fair has all-out snubbed First Lady Melania Trump by leaving her out of their 2017 International Best-Dressed List—and conservatives are pissed!

Far-right website the Daily Caller straight up dragged the publication’s absence of FLOTUS from the list, noting that while she didn’t even receive a mention, President Barack Obama and Michelle Obama found themselves on this year’s list for the third time.

The Left's pettiness extends even to this @VanityFair https://t.co/6uYTw8RcjB

OK, OK, sarcasm aside, it would seem a small portion of conservative Twitter is chirping about the magazine’s perceived petty slight against the first lady. I hate to break it to them, but the only person they have to blame for Vanity Fair skipping Melania is her husband, Donald Trump, the tie-clip-forgoing president of the United States.

While it might be an impulse to blame the Obamas for Melania’s snub, both they and the Macrons were included in the list under couples, not as single individuals. Yes, Trudeau was included under the men’s list, but more than likely that’s because the U.S. has fawned over his angelic bone structure and perfectly-coifed hair time and time again. Meanwhile, Melania’s conservative puffy sleeves and pussy bow blouses were no match for the looks served by Solange, Rihanna, and others awarded in this year’s women’s category.

And then we take a look at President Trump, who, on multiple occasions, has been caught securing the back of his tie with some scotch tape, has never worn a properly fitting suit in his life, and has insisted on publicly peddling his oversized “MAGA” and “USA” hats for the past two years. For a flashy real-estate mogul and now world leader, Trump certainly doesn’t dress like one. If Melania was expecting to secure a best-dressed mention in the couples’ category, just like the Obamas, President Trump all but deflated her chances.