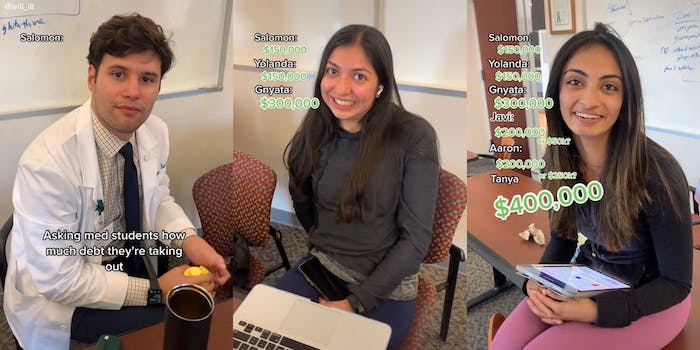 ‘How are y’all so casual about it’: Med student shows how much debt each friend is graduating with, sparking debate

'Y’all don’t be feeling too bad for them.'

A student’s video showing how much debt his friends in medical school will be graduating with has given some viewers perspective, sparking discussion about the state of higher education.

In the video, posted by @will_ill, current medical students share that they are expecting to graduate with anywhere from $150,000 to $400,000. On the higher end of the spectrum is one woman who said she is an out-of-state student, meaning her tuition is likely higher.

As @will_ill and his friend are laughing about the $400,000 she is expecting to owe in student loans, he jokes that she “might be able to pay that off” before she dies.

According to Student Loan Planner, physicians graduate with an average of $320,000 in debt, and the range of salaries spans from just over $200,000 to $500,000 in some of the higher-paid specialties.

Some commenters criticized the cost of education, especially given the value of doctors and other healthcare professionals.

The top comment reads: “how are y’all so casual about it … I’d be in constant crippling anxiety if I even had debt.”

“I don’t understand why becoming a doctor cost so much?” one commenter questioned. “Government should fund the program cuz they are literally the most important people in society.”

“Yes they will all make decent money eventually, but let’s not forget the real issue,” another wrote. “Higher Ed in the US is TOO EXPENSIVE.”

“Jeez we have a doctor shortage and we make them pay so damn much,” another said.

Others suggested that their post-graduate salaries would be worth the debt they’ve taken on.

“Y’all feel bad but at the same time they’re going to end up making more than double that in a year when they actually start working,” one commenter wrote. “It’s an investment.”

“I used to do payroll for a doctors practice,” another wrote. “Y’all don’t be feeling too bad for them. I had a doc make in one month what I made in a year.”

“That’s equivalent to what they’ll make in one year,” a third said. “If they are going for doctors. That’s not bad.”

The Daily Dot has reached out to @will_ill via Instagram direct message regarding the video.