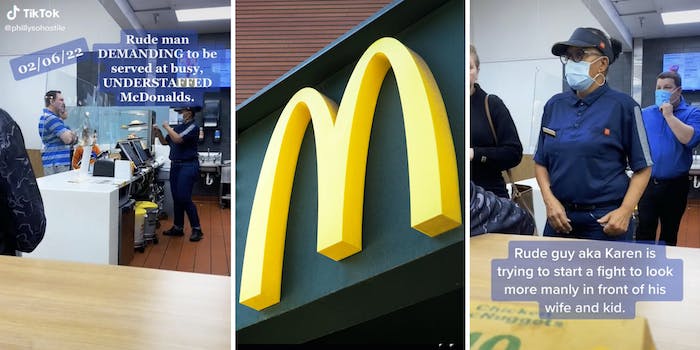 ‘Manager was supposed to have her back’: McDonald’s worker berated by male ‘Karen’ customer in viral TikTok

A McDonald’s worker was berated by a so-called male “Karen” at a busy McDonald’s, and another customer stood up for her in a viral TikTok. But in the end, the manager stepped in to help the Karen—sparking criticism from viewers.

TikToker @phillysohostile was sitting down to her meal at a McDonald’s when she saw a white man berating a McDonald’s employee. Her video of the encounter got over 66,000 views and 4,969 likes since posting on Tuesday. According to the TikToker, the event itself took place over the weekend.

In the video, the man is standing at the counter with his arms crossed. A woman and a small child are with him, who are presumably his family. He appears to already be arguing with the female employee, who is running back and forth trying to fill orders.

“You’re not next,” says the employee.

“Yes I am,” says the disgruntled man, called a male “Karen” by users in the comments.

At this point, another customer who was sitting there waiting for his food stands up for the employee.

“You’ve been rude to her,” says the other customer.

The manager of the McDonald’s comes out from the back to placate the Karen, and the other customer informs the manager it’s not the employee’s fault.

“You’re a dumbass,” he first says to the male Karen before addressing the manager. “She hasn’t done anything. He’s being an ass.”

“Can’t you refuse service?,” asks @phillysohostile, who has been sitting at her table filming the encounter. “You don’t deserve it.”

Apparently, this triggered the male Karen. He started to talk about “cancel culture” and mumbled to himself while the manager quietly placed his order.

“Is it part of this ‘cancel culture’… She’s too busy to take orders,” continues the male Karen.

“Cancel you, get out of here. That’s what he’s teaching his son.” says @phillysohostile.

The employee then started explaining to her manager that she was just following protocol.

“Those are the rules. Take two, run two,” says the employee.

Several comments criticized the McDonald’s manager for not doing more to protect his team. “How can anyone be okay with their coworker/employee being bullied like that????” @phillysohostile posits in the comments.

“The work environment I avoid at all cost. Manager was supposed to have her back. Customers ARENT always right,” adds @therealcedricw.

@phillysohostile’s TikTok is just the latest of several viral videos exposing how badly fast-food workers are often treated. In one instance, an anti-masker refused to leave an Arby’s with a mask requirement, and in another video a Dunkin’ Donuts worker shared how he worked two jobs to pay child support and bemoaned, “I do not get paid enough to listen to you.”

Part of fast-food worker frustrations may be due to how real wages have not kept pace with inflation. According to the Washington Post, “The typical burger-flipper is an independent adult of about 29, with a high school diploma. Nearly a third have some college experience, and many are single parents raising families on $9 an hour.”

The Daily Dot has reached out to @phillysohostile and McDonald’s via TikTok message and email for comment.