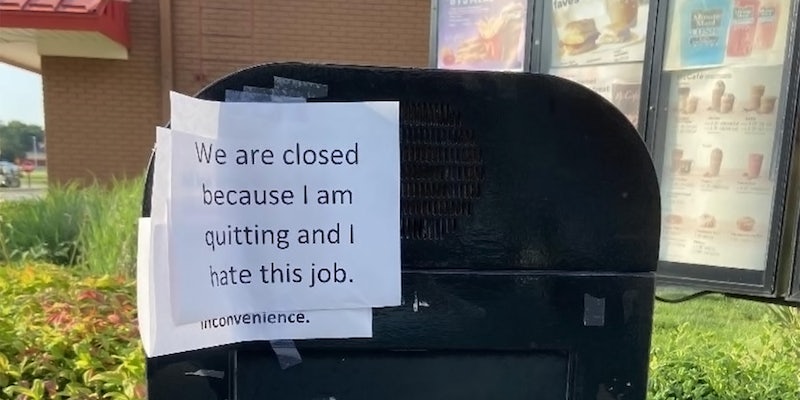 ‘Of course people are going to break down under these conditions’: Viral photo of McDonald’s worker’s ‘quitting’ sign sparks debate

'Good for them and at least they let the customers know.'

A viral photo posted to Twitter has sparked new debate about the realities of low-wage work and staffing problems at fast-food businesses.

@GreatApeDad posted a photo from his local Louisville-area McDonald’s, with a print-out, saying, “We are closed because I am quitting, and I hate this job.” It created a lot of questions for commenters.

Twitter users were in awe that a single person might be responsible for an entire McDonald’s operation.

“Wait, did they seriously have a shift of ONE PERSON at an entire mcdonalds such that one person quitting mid-shift shut it all down?,” one person wrote. “I’m willing to believe that, but my goodness, the sheer amount of neglectful staffing involved…!”

Others were rooting for the employee, citing the understaffing issues they’ve seen in their own neighborhoods and applauding workers for standing up for themselves.

“I’m seeing this trend on the internet a lot lately and really hoping it hits my town/surrounding towns soon because you can see visually how overworked/uncared for these people are,” one person tweeted.

“Good for them and at least they let the customers know. Way above and beyond,” another said.

@GreatApeDad suggests everyone has a breaking point under certain conditions. Responding to someone noting their own issues regarding the stress in understaffed workplaces, @GreatApeDad replied: “Workers were already stretched to their limits before the pandemic. Of course, people are going to break down under these conditions.”

Another person took the viral tweet as an opportunity to joke, “Why don’t they save us all the trouble and put up a sign saying their milkshake machine isn’t working.” @GreatApeDad replied and posted photo from last week with another print-out of “out of order” items pointing to a broken ice cream machine, suggesting that this isn’t the first time a frustrated worker has had to provide an explanation to customers for this McDonald’s work environment.