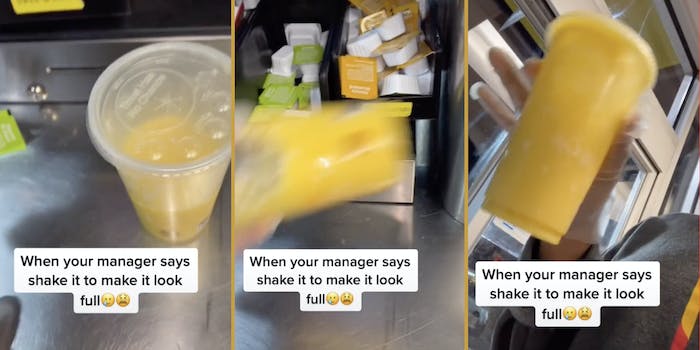 ‘I pay $5-6 for a drink from McDonald’s, it better be full’: McDonald’s worker reveals how they make drinks look full in viral TikTok

‘Which restaurant is this? So I know which one not to go to.'

In a viral TikTok, a McDonald’s worker revealed how she makes drinks look full when they’re only filled up halfway.

“When your manager says to shake it to make the drink look full,” user @nnennaaaaa6 wrote via text.

The TikTok shows the worker shaking the drink so it appears to cover the sides of the cup.

“Especially when it’s busy,” she captioned the video.

With over 4.4 million views, the TikTok sparked outrage from users in the comments.

“If yall did that to me yall getting cussed out,” one user said.

“I don’t get [why] yall be so stingy…it’s not even coming out of your paycheck…I worked to make money to pay you…” a third wrote.

Many questioned why the worker couldn’t just fill the cup all the way.

“Is this not a greater waste of time,” another said.

However, one user aimed to answer others’ questions. “It’s an automatic machine. We can’t control that it doesn’t fill up all the way,” they claimed.

Some said they will now start checking how full their drinks are as a result of the TikTok.

“[You’re] gonna give everyone trust issues now have them checking EVERY drink,” another said.

For others, the video prompted discussion of expectations of fast-food workers.

“This is why people don’t respect fast food workers :(,” one user said.

“Yeah but they don’t get paid enough to care [you know]? And probably because of the rush at these fast food joints,” another user responded.

“Yeah it is but does that mean they can’t do their job right?” another chimed in.

“Well if their manager is telling them to do that… that’s doing their job,” a fourth user pointed out.

The Daily Dot reached out to user @nnennaaaaa6 and McDonald’s via email.