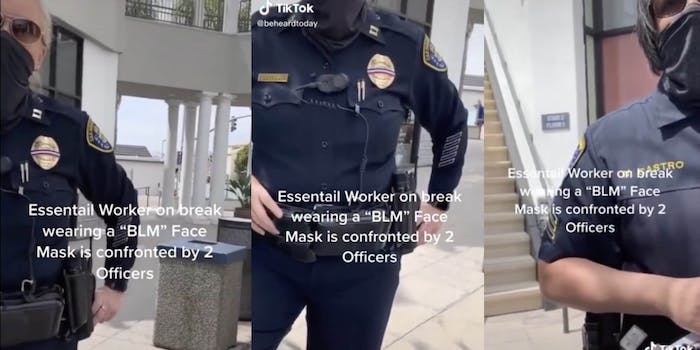 The officers are being called 'Karens with badges' after a video of the confrontation went viral.

Two police officers are being dubbed “Karens with badges” after a viral video captured the moment they demanded to speak to the manager of an eatery because they were fearful for their safety.

“We will not be coming here any longer,” one of the cops begins in the video.

“Can we speak to your other manager then, too?” the other questions.

The two officers then demand contact information for someone “above” the worker, but she refuses, saying she does not have the number. When the pair continue to press the worker for the number, she asks why they want to talk to the manager.

“We don’t feel safe coming here anymore,” one officer states, before following the worker into the restaurant to “find” the number.

The video, which was originally posted to TikTok, was reposted to Reddit with the caption, “Karens with badges ‘do not feel safe’ around restaurant worker’s BLM facemask.” The caption featured on the TikTok video itself also states the worker was wearing a “BLM mask.” However, it appears that Reddit flagged the video for having an inaccurate title, claiming the worker was actually wearing an ACAB mask. ACAB stands for “All Cops Are Bastards.”

Apparently, the site was tipped off to the fact that the worker was wearing an ACAB mask, though it’s unclear where the fact-check came from.

Commenters on TikTok called out the officers for the “Karen” behavior.

“So they’re letting Karens be cops? Dang they letting anyone,” user @semaj.bean commented.

“‘We don’t feel safe’ welcome to the Karen club,” another quipped.

A TikTok user alleging to be the worker in the video also appeared in the comments to give her side of the whole ordeal. She said it was triggered by her saying “Black Lives Matter” to police officers when they came in to pick up their orders. She also claimed she wasn’t wearing a “BLM mask.”

“”I said ‘thank you, black lives matter,’ and he laughed and walked out,” she explained. “Then like an hour later these two officers come looking for me WHILE ON MY BREAK to talk to me about ‘the issue’ ALL BC I TOLD AN OFFICER BLACK LIVES MATTER!”

She also said that the restaurant has not taken any action against her and has instead been very supportive.

“JUST TO BE CLEAR: I WAS NOT FIRED AND THE COMPANY IS SUPPORT ME,” she added.

The Daily Dot has reached out to the worker and the TikTok user who uploaded the video. It remains unclear whether the employee was wearing a mask with “ACAB” on it.