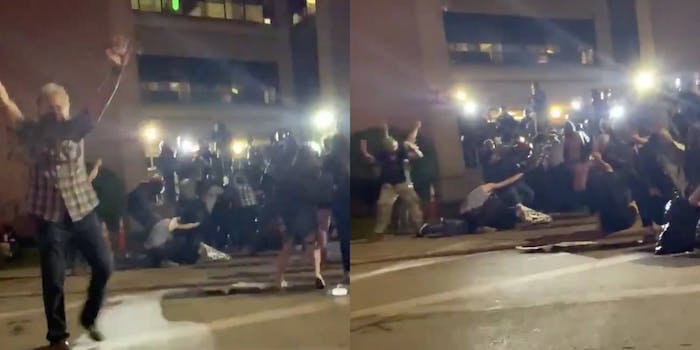 Twitter users shared the video with the hashtag #HisNameIsJustinHowell.

Video from the weekend shows a group of about five people carrying what appears to be an injured man through a clearing in an otherwise crowded space.

As the group approaches the crowd, shots are heard, and chaos ensues as people start running down on the street. Behind them appears a stream of cops in riot gear.

People are heard screaming, “What the fuck!”

There are more shots, and some people and a protest sign are seen dropping to the ground. At least one person is seen lying flat on the ground.

According to the Statesman, Austin Police Chief Brian Manley said on Monday that a man fell to the ground and after police shot him using a bean bag round, or a baton round fired as a shotgun shell.

Joshua Howell, an editor at Texas A&M University’s student newspaper the Battalion, identified the victim as his brother.

In an op-ed published on Tuesday, he also identified his brother as the man being carried by the group in the video posted.

Howell quoted Chief of Police Brian Manley as saying at a press briefing the shooting happened when protesters were “given direction” by officers to bring Howell’s injured body to the officers.

“At minimum, it takes a special kind of incompetence to fire at those who are doing as the police tell them,” Howell wrote in the op-ed. “At minimum, it shows a complete inability to be aware of your surroundings and to manage the situation appropriately.”

Justin Howell reportedly suffered a fractured skull and brain damage. As of publishing this report, Howell remained in critical condition.

On Thursday, after the extent of the incident was clear, people shared details online with the hashtag #HisNameIsJustinHowell.

“What happened right after he was shot was even worse,” one person wrote.

Some pointed out the irony and disgrace of another Black man falling victim to police while around the country—and worldwide—protests are taking place to oppose police brutality on Black people.