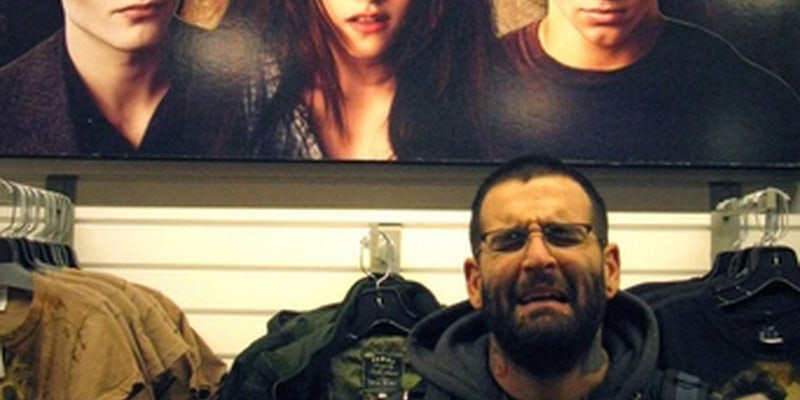 Mark Oshiro reads, watches, does stuff—and talks to the Daily Dot about all of it.

In August 2009, Mark Oshiro, a self-professed “vegan cyclist” and “atheist bookworm,” decided to read Twilight. The only problem: He didn’t actually know anything about Twilight. Really. Not even that spoiler that everybody knows.

Serving as the community manager for Buzznet, Oshiro agreed to post reviews of Twilight from the perspective of a first-time reader on the site. The reviews grew so popular that they spawned a second series, Mark Reads Harry Potter, followed by two branch-off websites (Mark Reads and Mark Watches), and two national reading tours, dubbed Mark Does Stuff. He has nearly 25,000 regular readers and a backlog of over 200 books to cover.

The Daily Dot caught up with Oshiro at Ascendio, a recent Harry Potter fan convention in Orlando, Fla. When he wasn’t doing panels and entertaining con-goers, Oshiro spent time talking to new fans as if they were old friends, and he told a crowd it was “one of the best weekends of his entire life.”

Oshiro took time out of his regular fanboy schedule to discuss what it’s like to run the Internet’s largest one-man book club.

Daily Dot: If you had to describe to someone who didn’t really know what your Internet home was about, what would you say to them?

“I’ve learned to distill it down to one sentence, which is: I run an online book club where I’m the only person who’s never read the book. Everyone else knows it, and they’re watching someone else discover a fictional world. It’s a celebration of fandom, and I like the idea of saying, ‘Hey, let’s have this space where we can not only enjoy the experience of reading a book, but actually talk about all the different things that it brings up, either intentionally or unintentionally, and lots of subtext.’”

DD: Is there a sense in which your discovery of a work helps fans rediscover it themselves?

“I think so, especially now that I’ve gotten to experience it after having done Mark Does Stuff. (Actually in August it will be three years.) I introduced some of my friends to Game of Thrones. I’ve read all the books, and I’ve been watching them watch the show more than I’ve been watching it, and now I get why all these people are visiting my site.

“The thing I hear the most is that it’s so awesome because you get a new appreciation for it. You’ll never get the original appreciation, because we can’t go back, but you get layers. The same thing will mean 30 different things to 30 different people. And the site says that all of that is OK. The people who’ve come to the site understand that we’re trying to have an open conversation.”

DD: Do you do things to isolate yourselves so that you don’t find spoilers?

“I have a team of 19 moderators, and they go through and wipe things out. I don’t think people realize how many hundreds of comments a day we delete. And I use Tumblr Savior, so any of the shows I know I’m going to be watching, they’re all listed. I have stuff I don’t plan to get to for years.”

DD: You have a backlist?

“I’ve got 60 to 70 books, and on the TV side there’s about 50 shows that I have agreed that I’ll do. People have this weird idea that I have this secret list that’s the actual real order, but I don’t. I just pick. If I know what genre something is, I’ll switch things up. Once I wrap up the whole Whedonverse, I’m doing anime, so I’m doing Princess Tutu and Cowboy Bebop.  And then after that, I’m going to do maybe some other little shows in-between, and then after that I’m going to do a straight . I’m going to do The West Wing, which I’ve never seen. I like ideas that totally have nothing to do with each other.

“Same with Mark Reads. You get to find out first, but the next book I’m doing is Good Omens, and then after that I’m doing two series: One is a young girls’ fantasy series by Tamora Pierce, Song of the Lioness, which by the way is the most-requested thing I’ve had on the site. And then I’m doing this new zombie trilogy.

“Newsflesh! So I’m doing those concurrently. It’s this thing where I figure it out at the last minute. I don’t have any long list, there’s no mystery order.”

DD: Do you ever find yourself going back to much-loved things that you’ve seen a million times just for the familiarity?

“I didn’t grow up being allowed to watch television, so I developed this weird idea that all television was bad. And then in my twenties, I was like, what is wrong with me? There’s so much good television!  So Mark Watches is a little different because for me, I don’t have as many things as I do in literature to reference to. When I do Mark Reads, I reference other books way more than I do other TV shows. Mark Watches is like, I’ve seen nothing; I know nothing at all. Mark Reads is more like, here’s stuff I’ve missed.”

DD: Would you ever consider doing something more transmedia, like video game narratives?

“If I had all the time in the world, yes. I would do video games and music; those are the other two big media entities. I started the Mark Does Stuff vlog, which has done super well, and that came out of doing the Mark Does Stuff tour.  If I hadn’t been out in public, I’d have never done those videos.”

DD: What happens when people who don’t know anything about you or the site find out about it?

“OK, I’m going to tell you the best story. On tour in Denver, I opened with a reading of Hermione and the Pizza Boy, which is the worst fanfic on the face of the planet. No, I take that back; it’s the best fanfic on the face of the planet, but it’s a level of confusion, and none of it makes sense. The story just ends in the middle, and there’s no actual pizza in the story, and you’re just like, what is going on? This one girl, I could just tell that not only did she not only know who I was, but she’d never read fanfiction in her entire life.  And I was just watching her sitting there having a nervous breakdown.”

“I haven’t done it yet, but I’m gonna do The Shoebox Project as a Mark Reads thing. But I have done videos where I read this amazing Dr. Who fanfic on video that was super-good.”

DD: Didn’t you read My Immortal?

“Oh, my god. I gave up because it was so awful. But someone brought me a video of the first chapter of Harry Potter and the Methods of Rationality, and now on my own I’m on like Chapter 20. It’s interesting, ‘cause I’m not a fanfic person.”

DD: Did you know about fanfic before all this?

“I used to work at Buzznet, so I had to read every single piece of fanfic that came in. I’ve read more fanfic than any person in this building because every single day, I’d have to read 100-200 pieces of fanfic per day. I’ve probably read 10 to 15 thousand fanfics in my life—most of them terrible. So it’s actually been in the last six months that I’ve taken such a huge break from it that I’m able to enjoy it. I’ve read some terrible fanfic that I genuinely enjoyed, because it’s not written well, but it’s so awesome. Actually I just did a video of the one where it was Hogwarts and the Giant Squid?  I think it’s genius!  It’s so touching in this really weird way! And I know it’s really gross, because there’s like ink squirting everywhere and it’s weird. But it’s so touching, because Hogwarts is lonely! The giant squid is lonely! No one ever talks about him!

“So I’m going to do the Shoebox Project; I just have to figure out when I have time.  I spend most of the week not only writing the digital books that I’m releasing, because I’m rereading Harry Potter and writing full reviews for each book, and I’m actually writing my first novel. So that’s been a huge time thing.”

DD: Do you write as though all Mark Reads readers will be reading your book?

“On tour I brought it up, and people were like, ‘So who’s going to do Mark Reads Mark’s Stuff?’  I want to have that aspect of a fandom. As far as I’m concerned, if there aren’t, like, 300 fanfics written by the time the book hits the shelves, then I’ve failed as an author.”