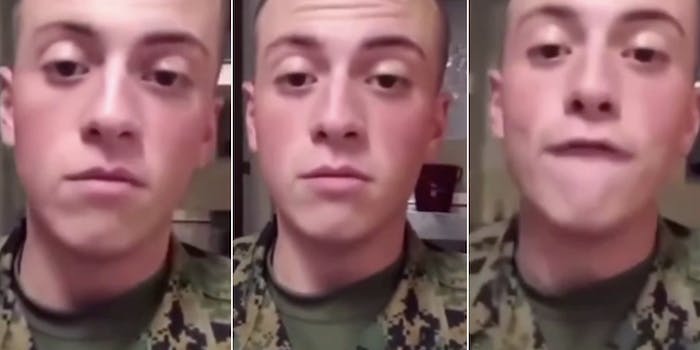 He blamed China for the spread of coronavirus, quoting President Donald Trump.

The U.S. Marine Corps has launched an investigation into a Marine who filmed himself using racist slurs for Chinese people, blaming them for the spread of the coronavirus, and threatening to shoot them while deployed.

Capt. Joseph Butterfield, a Marine Corps spokesman, identified the man in the video as 20-year-old Pfc. Jarrett Morford and said his command is taking “appropriate action,” according to Stars and Stripes.

“There is no place for racism in the Marine Corps,” Butterfield added. “Those who can’t value the contributions of others, regardless of background, are destructive to our culture and do not represent our core values.”

Morford’s racist tirade quickly made the rounds on social media and was uploaded to the r/PublicFreakout subreddit on Friday.

“As the honorable Trump said on Twitter today, it was China’s fault,” Morford begins his video, seemingly referring to President Donald Trump’s Wednesday video from the White House. “China is going to pay for what they have done to this country and the world. I don’t give a fuck.”

Morford continues with racist slurs and explicit threats: “A chink-headed motherfucker comes up to me when I’m in the fleet? Say 556, bitch. That’s all I’ve got to say. Say 5-5-fucking-6.”

According to Stars and Stripes, 556 is a reference to the caliber of bullet used in M4s and M16s, the standard rifles issued to Marines.

Redditors tore Morford to shreds in the comments of the r/PublicFreakous post. “These are the type of assholes that try to become police officers,” one user wrote. “Due to not having enough power and being the runt of the platoon.”

“You can see in his eyes he’s not playing with a full deck,” another added.

Fred Wellman, senior advisor for veterans affairs at the Lincoln Project, shared the video of Molford’s tirade on Twitter and blamed Trump for emboldening and normalizing such racism.

“He quotes Trump as he goes on a racist anti-Chinese rant…in…his…uniform,” Wellman wrote. “The President is infecting the military and nation with his racism and hatred. The good news…this POS will be a civilian in about a month because the Marine Corps Commandant ain’t playing.”

One Twitter user replied to Wellman with a more chilling prediction: “He’ll be a Proud Boy before the end of the year.”