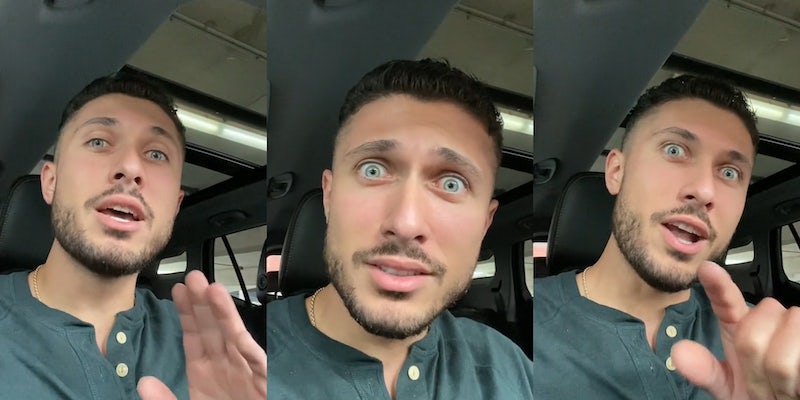 ‘How do men not know we deal with this everyday?’: Man posts about witnessing construction workers catcalling a woman for the first time, sparking debate

'I didn’t realize that was a real thing that happened in real life.'

Street harassment is incredibly common. A 2018 report from activist group Stop Street Harassment stated that “81% of women and 43% of men reported experiencing some form of sexual harassment and/or assault in their lifetime.”

Verbal street harassment, or “catcalling,” was top among the various forms of harassment, with 77% of women and 34% of men reporting that they have at one point been verbally harassed.

While this form of harassment is common, for those who haven’t experienced it personally, the feeling of seeing it occur for the first time can be startling.

A TikToker recently went viral after documenting their own first encounter with seeing street harassment. In a video with 79,000 views, user Louie (@louietomassi) recorded his surprise after seeing a woman get catcalled by a group of construction workers.

“I am shocked and flabbergasted at what I just witnessed,” he says at the video’s onset.

In the video, he describes the events as he remembers them. As he was leaving work, he saw a construction worker “whistle and catcall” a nearby woman.

“I looked at him, and I said, ‘Are you deadass?’” Louie recalls.

“I didn’t realize that was a real thing that happened in real life,” Louie admits. “On behalf of the male species, I want to apologize.”

In comments, users revealed their own experiences with street harassment.

“The worst part is the younger the girl/woman is, the more they will get catcalled,” claimed one user.

“Welcome to the life of a female round the clock,” added another.

“It’s real and not just from construction workers,” a third wrote.

Many criticized Louie’s ignorance on the topic.

“How do men not know we deal with this everyday,” a TikToker asked.

“I didn’t realize that was a real thing that happened in real life’ men are literally so lucky,” a second stated.

“I love it when men don’t believe us when we say this happens to us,” shared a further user. “They literally have to see it first to believe it.”

“100% not looking to attack you and DO appreciate this, but you really had to see it to believe it’s a reality when when women have told y’all this??” questioned an additional TikToker.

In response, Louie admitted his ignorance and said that he was trying to call out what he saw as reprehensible behavior.

“I knew y’all deal with creeps on the regular but damn, dudes really out here just bothering women for the sake of bothering them,” he wrote. “Like WTF.”

“Not some of y’all attacking me about an action that I am calling out as gross and weird behavior … I’m on your side about it damn,” he said in the comments section.

However, in general, users appreciated Louie for finally understanding what is an everyday experience for many women.

“Thank you for calling out that atrocious behavior! Imo more men should be holding each other accountable for their shitty behavior,” wrote a user.

Update 8:12am CT August 20: In an email to Daily Dot, Louie shared his thoughts on the experience and the video itself.

“From my perspective, I was shocked that in 2022 some men haven’t realize[d] by now that it’s not ok to objectif[y] women like that,” he wrote. “The reason for making the TikTok was to put a mirror to guys who think that this type of behavior is ok and show them how problematic that behavior is. I never have had to deal with that as a man, and it’s disappointing that women have to deal with it on a daily basis.”

“I’m glad it started a conversation,” he concluded.