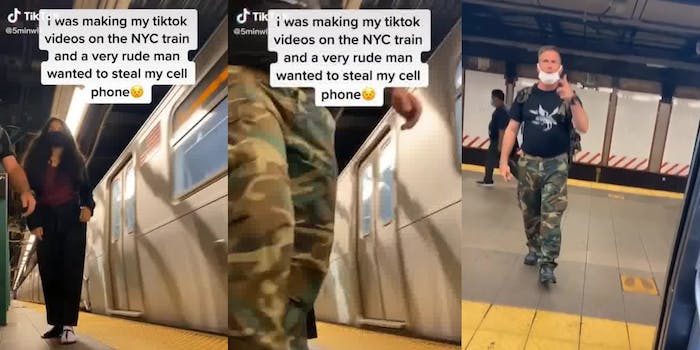 ‘You’re trying to set people up.’

A young woman was allegedly trying to record a TikTok video in a subway station in New York City when she apparently recorded an attempted theft instead. TikTok user @5minwithaurea posted the moment this week when a man reached for her phone—which was seated away from her on the ground—and the events that followed. The 46-second clip has reached over 125,000 likes and nearly 3,500 comments.

In the beginning of the video, the woman is seen placing her phone on the floor and distancing herself to fit in the frame. “I was making my TikTok videos on the NYC train and a very rude man wanted to steal my phone,” she captioned the scene. The man is then seen picking up the phone and walking away quickly from her as she yells “that’s mine” in the background. The man then drops the phone on the ground and the woman puts the camera fully on him.

“What are you going to do?” the man asks her. “You took my things,” she responds. “I stole your shit? I touched your stuff. Get the fuck out of here,” the man angrily yells at her. The woman runs onto the train and continues to record the main through the door. “Who stole your shit? You’re trying to set people up.” He continues to yell at her until the doors close and he is no longer audible. As the train pulls off, he holds his middle finger to the woman.

The video was also posted to Reddit, where users displayed their concern for the woman, but also warned her about leaving her belongings unattended.

“High key tho from someone who rides the NYC subway every day the last thing you should ever do is leave that shit on the floor lmao,” one user commented.

“F**k that guy but you’re absolutely right you don’t do that. It’s like one of the golden rules of Nyc subway. 1, Don’t leave your shit unattended. 2, Don’t talk/stare at the crazy guy/gal on the train,” another suggested.

Others brought attention to the sanitation issues with placing items on the ground in a busy subway station. “It’s not even about people stealing it, have you seen the things that go on the ground at the subway,” one user asked.