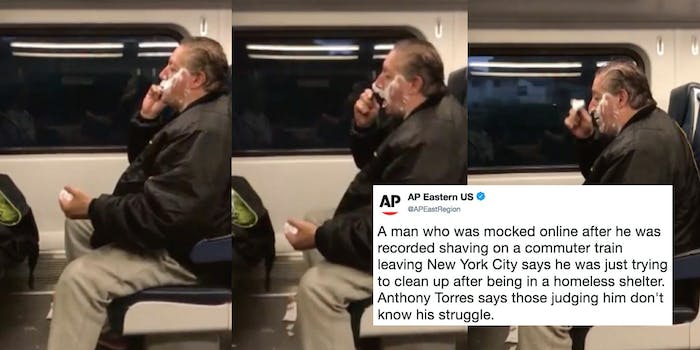 The era of recording strangers in public to shame them for doing notable but essentially harmless things is over, and it ends with a New York City man who was laughed at online for shaving on a train.

Last last week, 56-year-old Anthony Torres became the subject of viral judgment when he was recorded by a fellow passenger on New Jersey Transit shaving. Shaving while seated with the rest of the passengers, yes, but minding his own business nonetheless.

The video, which was posted Thursday and amassed more than 2.4 million views, has been taken down from Twitter, and the account that it was posted by has since been deleted.

But the comments stayed with Torres. People called him a slob and an animal, according to the Associated Press. Which is why Torres’ brother Thomas Torres reached out to the media after seeing his brother go viral; he wanted the people judging him to hear his side.

“My life is all screwed up. That’s the reason I was shaving on the train,” Anthony told the AP.

Anthony was on his way to Thomas’ home after spending days in a homeless shelter, according to the AP. He’d reached out to another brother for help, who then gave him money for a ticket to Thomas’ house in southern New Jersey. He didn’t want to tell people that he was homeless and wanted to look “presentable,” so that’s why he was shaving on the train, having not had a chance to before he left the shelter.

Thomas told the AP that his brother had a hard life—the family grew up poor, and Anthony has chronic medical conditions and has often made “short-sighted decisions,” such as shaving on a train.

“When he did what he did, that to him was normal,” Thomas told the publication. “He’s not that kind of person that does it because of spite or because he wants the attention.”

Anthony said he didn’t realize someone was filming him, and it amazed and upset him that he went viral.

“I never thought it would go viral, people making fun of me,” he said.

Across Twitter, days after the initial flood of people criticized Anthony, the tide of internet opinion has changed, with many shaming the people who once shamed Anthony and the person who secretly filmed him shaving.

A poignant reminder not to judge, as Jesus counsels us. You never know what struggles people have. Everyone is, in some way, battling with something. Especially with those who are poor or marginalized, we should be vigilant about not judging. https://t.co/J4N9sYZIBx

Sad how social media has evolved into an easy way for some people to make fun of others. Maybe, if we understood their situation, we'd be less likely to judge and mock. https://t.co/wWpihjUST5

I feel a bit guilty. We ran this yesterday, and made fun of this guy on the air. It was a video that had gone viral. I guess it's a lesson, often there is a back story that is not all that funny . . #9news https://t.co/YrLGAKkeMV

May we be not so quick to judge, film, or share the next time something so harmless happens within our frame.